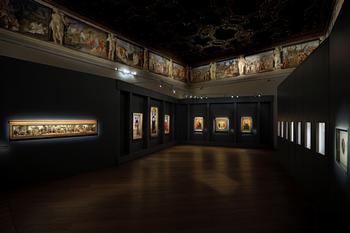 A masterpiece of the Bolognese Renaissance has returned to the city of its birth for the first time in 300 years. The exhibition at Bologna’s Palazzo Fava had previously closed early due to the pandemic, but as of last week it has been allowed to reopen again, meaning visitors have until 15 February to glimpse the rare display.

The Griffoni Polyptych—a 16-piece panel painting dating from 1470 and 1472—was created by Francesco del Cossa and Ercole de’ Roberti for the Griffoni family’s private chapel in Bologna's Basilica di San Petronio. Cardinal Pompeo Aldrovandi dismembered the work in 1725, and the panels gradually dispersed. Today, they are housed in nine international museums, including London's National Gallery; Washington, DC's National Gallery of Art; the Vatican Museums; and the Louvre in Paris. In room three of the exhibition, digital reconstructions of the Polyptych and drawings related to its composition are projected on the walls Photo: Paolo Righi

The composition includes circular and rectangular panels of various sizes that portray prominent saints; it is renowned for its virtuosic detail, expressive power, and the originality of its predella, which depicts the miracles of Saint Vincent Ferrer in one long, unbroken scene. Bridging Gothic and Renaissance styles, the work foreshadows Bolognese School painters such as the Carracci family, who would flourish a few decades later.

Art historians have long dreamed of recomposing the work, and, for this show, the curators Mauro Natale and Cecilia Cavalca spent two years trying to secure the multiple loans. "We had to convince the various museums of the suitability of the exhibition space," Natale tells The Art Newspaper. "After Washington and London agreed, the others then came on board,” he says.

Yet the pandemic has made the exhibition a stop-start affair. The scheduled March 2020 opening was postponed due to the lockdown, and did not take place till May; while the Italian Culture Ministry had extended the loans to mid-February 2021 by then, the worsening health situation meant the exhibition had to be closed in November last year. In a final plot twist, museums across Italy were allowed to reopen at the end of last month. That has provided visitors with one last chance to see the Polyptych. Palazzo Fava has seen hundreds of visitors daily since it reopened on 1 February Photo: Paolo Righi

The exhibition—which has registered an average of 300 daily visitors since reopening on 1 February, according to a press official—explores the Polyptych’s creation; hypothetical attempts to reconstruct the panels through the ages; and the work’s original configuration, as confirmed by an 18th-century sketch discovered in the 1980s.

Shown individually, upper panels with gold backgrounds are more antiquated in style, while architectural backdrops in the lower panels lend a more modern appearance. Displaying the pieces in a room frescoed by works by the Carracci family (perhaps inadvertently) hints at the Bolognese School artists who, in the late 16th century, were on the horizon.

The exhibition has aroused mixed emotions in its curator. "Seeing the panels in Bologna is an extraordinarily powerful experience," Natale said. "That has made people in the city painfully aware of how much the work is missed."