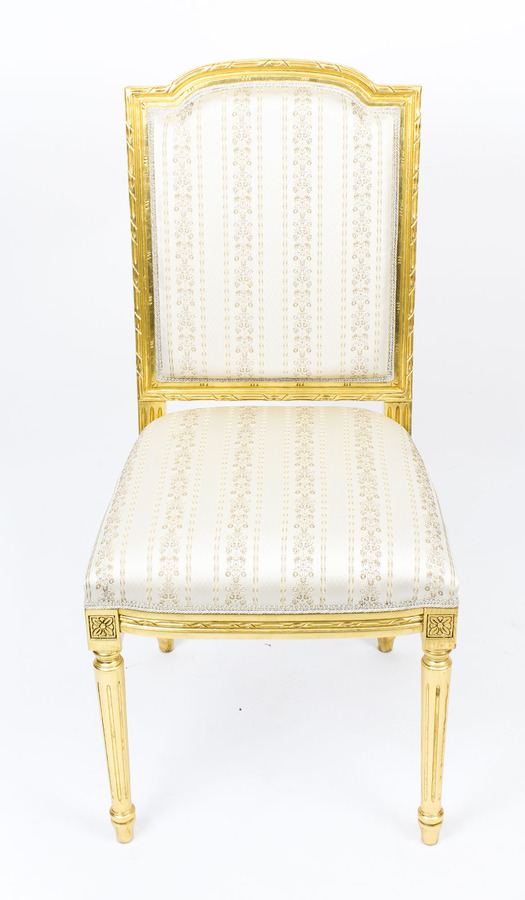 Orders available in any denomination.The chairs have been crafted from fabulous hand carved solid beech and then gilded. They feature a beautifully carved cresting of a bouquet of flowers. The shaped backs feature a gadrooned scalloped design with acanthus leaf carved open padded arms and uprights with ring turned and tapering fluted legs.The chairs can also be upholstered in the fabric of your choice.The quoted price of £780 is per side chair.Add a touch of unparalleled grandeur to a dining table in your home with these stunning chairs.
Condition:In excellent condition, please see photos for confirmation.Dimensions in cm:Height 102 x Width 49 x Depth 54Height 52-Seat HeightDimensions in inches:Height 3 foot, 4 inches x Width 1 foot, 7 inches x Depth 1 foot, 9 inchesHeight 1 foot, 8 inches-Seat Height
Our reference: 08598
Louis XV FurnitureBetween 1769 and 1775, the furniture designer André Jacob Roubo published a series of books of engravings called L'Art du menusier, detailing the categories and styles. He divided the chairs into two categories; those with a straight back, called á la Reine, and those with a rounded back, called en cabriolet. The chairs en cabriolet were usually lighter, often had cane seats and backs, and could be moved around easily. included some new styles, notably the voyeuse a small chair with an armrest on the back, so the person seated could either face forward or turn around and sit astride the chair with his arms on the back of the chair.The fauteuils, or armchairs, were larger and designed for comfort; their styles evolved during the reign of Louis XV. During the early years of the Regency (1715-23) the armchairs had short curved feet, the top of the back was slightly curved, while the supports of the back and the arms were straight. The armchairs of the middle Louis XV period (1723-1750) were smaller than those of the Louis XIV period, but more comfortable. The legs were more curved, the top of the back was rounded, and often had a small ornamental design. The back of the chair took on a more graceful violin form. This form became known as the Chaise a la Reine, or "Chair of the Queen."A variety of other new forms appeared, designed especially for comfort. The Bergere had a low seat with an additional cushion, and sometimes added padded wings atop the arms on either side of the back which protected the head against drafts, which also made it easier to take naps. Other new types that were introduced were the marquise, basically an armchair expanded to seat two persons, and the chaise longue, an armchair with a lengthened seat to support the legs, and the Duchesse, where two chairs could be combined with an extension between. Another new type was the Fauteuil de cabinet, a type of chair designed to go with a desk, and to provide more comfort while writing. It was usually upholstered in leather fastened with gilded nails to the frame, had rounded angles, and one leg of the chair was placed in the front, another directly behind, for greater stability. The curved back and arms of the chair enveloped the person seated.The passion for the oriental and exotic soon influenced the furniture. A new kind of seat, La Sultane was introduced, with two places; another type called the Ottomane, with the back in a form called en gondola, and arms which wrapped around the oval seat, and another variety, called la papose,without arms or a back; and finally Le Sofa, which featured cushions which could be moved and rearranged.The last phase of the Louis XV style, the gradual transition toward the neoclassical, had a limited effect on chairs. The basic forms remained, but the decoration increasingly took the form of garlands of flowers called a l'ántique in a repetitive rhythm, which opposed the sinuous form of the carved legs and frame.