Antiques Magazine - February 2021, The emperor started each day with an impressive display of power - ANTIQUES.CO.UK

The emperor started each day with an impressive display of power 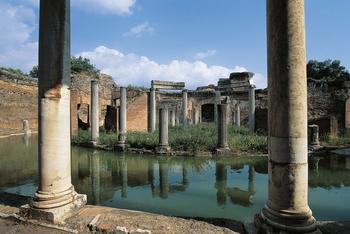 Archaeologists Have Found the Roman Emperor Hadrian’s Palatial Breakfast Chamber, Where He Dined Before Servants on a Marble Throne

Archaeologists working at the sprawling 200-acre site of Hadrian’s Villa in Tivoli have discovered a breakfast room where the Roman emperor would dine with his wife, Vibia Sabina.

Now a UNESCO World Heritage Site, the estate was constructed around 120 AD and served as a retreat for the emperor when he wanted to relax outside of his Palatine Hill palace residence in Rome. Some nine years later, Hadrian began living full time at the villa, ruling and from 20 miles east of the capital.

Researchers discovered the breakfast area within the ruins, and it reveals how the emperor and his wife began each day with an impressive display of power. They believe the emperor would have sat on a raised marble platform, flanked by fountains. Situated in a semi-circular area with windows, members of the court could have seen the ruler’s silhouette, making for a dramatic scene.

Both Hadrian and his wife were positioned as if on thrones, with retractable bridges further setting them apart from their many servants. The platform led to four separate bedchambers that boasted toilets embedded with precious stones.

“It was a quasi-theatrical spectacle,” Andrea Bruciati, art historian and site director told the Times of London, adding “politicians could learn from him.”

The emperor personally helped design the complex, which consisted of more than 30 buildings constructed in Roman and Greek architectural styles, with nods to many of the places Hadrian visited during his extensive travels. Fountains, gardens, pools, and baths dotted the landscape, and the estate used the same aqueducts that ran through Rome.

A recreation of the Nile River ran through one area, paying homage to Hadrian’s young lover Antinous, who drowned in the Egyptian city of Canopus.

“The Villa was a machine that served to represent the emperor’s divinity, it was almost futuristic,” said Bruciati

The historic site was reopened earlier this week as Italy eased restrictions on museums and other cultural venues closed for social distancing.