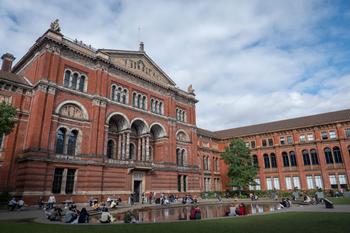 The museum will restructure its curatorial departments, organizing them by time period, rather than by material.

London’s Victoria and Albert Museum is making drastic cuts to its workforce as cultural institutions around the globe struggle amid extended and repeated closures.

Unions learned that the V&A’s “recovery strategy” would involve lay offs and the restructuring of curatorial departments on Thursday, according to the Guardian. The Art Newspaper confirmed news of the layoffs this afternoon.

To combat a “mounting deficit,” director Tristram Hunt told TAN, the museum is cutting 140 of its 980 jobs, including 30 curatorial posts and 110 from a number of departments including visitor experience and retail. The goal is to trim at least £10 million ($14 million) from the budget by 2023.

The pandemic has left the V&A reeling as attendance plummeted in 2020 to just 20 percent of what it was in 2019. Visitor numbers will probably be at 25 percent of pre-pandemic levels in 2021, and may not return to normal until 2024.

The layoffs follow a round of voluntary redundancies first announced in September, when the museum unveiled the first phase of its recovery plan. The curatorial cuts will mean restructuring entire departments, which are currently organized by materials such as woodwork and metalwork.

The European and North and South American collections will now become one department with three subdivisions. The sub-Saharan Africa and African diaspora collections will join with the museum’s Asian collection in a new department, and the V&A’s Archives and National Art Library will become part of the V&A Research Institute.

“The proposed changes will simplify department structures, retaining curatorial expertise and specialisms across all key material types,” a spokesperson told Artnet News in an email. “Our focus remains on consulting openly and meaningfully on the proposals with our staff and trade union colleagues, and to support our staff community through this difficult process.”

“The curators will be more stretched, it’s true, but I hope the chronological approach will lead to more synergies between them,” Hunt told TAN, noting that the museum’s curatorial staff will continue to outnumber that of the Tate and the British Museum and many European institutions.

But insiders are worried about the long-term effects of such a move.

“It’s hollowing out the expertise of the museum,” one person told the Guardian. “Very experienced conservators are leaving or have left. Some conservators and curators have already left on voluntary terms. The next wave is forced redundancies.”

The Tate moved to eliminate some 400 positions last year, prompting an extended strike, while the London Royal Academy shed 150 jobs. Layoffs have been more prevalent in the US, with the most recent round coming earlier this week with 15 cuts at the Whitney Museum of American Art in New York.