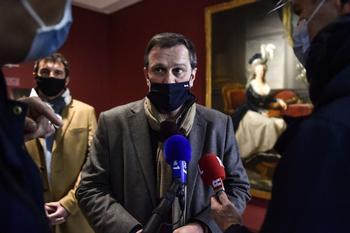 The populist mayor of the southern French city of Perpignan must re-close the four museums he opened earlier this month in defiance of the national lockdown, a Montpellier administrative court ruled Monday.

Last week, Louis Aliot, Perpignan’s mayor and the vice president of the far-right National Rally party, ordered the reopening of the Hyacinthe-Rigaud art museum, the Casal Pairal Museum of Catalan Art, the National History Museum, and the Joseph Puig coin museum—all of which had been closed since October.

The move, seen by some as a sign of the growing frustration with France’s strict stance toward reopening cultural institutions during the pandemic, was nevertheless met with swift public backlash and contested in court. The judicial body ultimately ruled that Aliot could not position himself above President Emmanuel Macron to defy the lockdown decree.

“We regret this decision, which will keep away our fellow citizens who are already suffering immensely during this health crisis,” the mayor wrote on Twitter. “Culture is an essential need that asks only to be expressed.”

The mayor’s office did not immediately respond to a request for comment.

The Hyacinthe-Rigaud welcomed some 2,000 people over the past week, according to the French news outlet The Local, including 50 visitors within just 15 minutes of reopening for the first time on February 9. Speaking to reporters at the museum that day, Aliot argued that implementing preventative measures would be enough to make museums and other cultural venues safe for limited visitors. “There is a virus and it will be with us for a long time,” he said at the time. “There are treatments, there are vaccinations, there are precautions we can take. Let’s get used to it and start by trying things out.”

“We simply took into account the health context and our cultural facilities and the voices that are raised from cultural and popular circles, of those who want to have access to the world of the spirit,” Aliot added during the hearing.

The document came shortly after an announcement from President Macron made clear that museums in France would remain closed for the foreseeable future, even though he’s opted not to impose a third national lockdown.

“After hearing the latest government announcements, we want to make our voice heard,” the letter read. “We ask to be able to fully play our role of unifying places, conveying what has meaning, and to reopen the doors of our institutions as widely and as soon as possible.”

“For an hour, for a day, for a week, or for a month, let us partially open our doors,” the document implores.

Bachelot recently promised that museums and national monuments would be among the first spaces to reopen once infection rates drop, noting that, after discussing the matter with 30 museum directors, he’s “very open” to allowing these venues to operate at a limited capacity.