On tax returns in ancient Rome 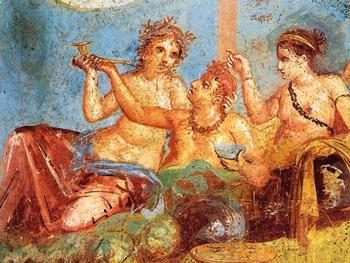 In ancient Rome, the wealthy liked to hold on to their money – and often went to extreme lengths to do so

When it comes to the annual tax return, I think about the Romans, and how closely they were able to guard their wealth. The prospect of filling in reams of forms in order to give one’s hard-earned away would no doubt have made them shudder. They liked to hold on to their money, and often went to extreme lengths to do so.

It wasn’t simply that the Romans were reluctant to part with their earnings. You need only glance at a small collection of their coins to appreciate that they valued them as objects as well as currency.

My feeling is that they liked the look of money in their hands. Political leaders certainly exploited Romans’ fondness for keeping coins within sight by covering them with designs that served as propaganda. For something so small, a silver denarius had enormous scope.

Rome’s central treasury was based in the Temple of Saturn at the foot of the Capitoline Hill. The fact that state funds and public records were kept in a building of religious significance ought to have inspired confidence in potential savers. And yet, ancient Rome was filled with tax collectors, including ruthless publicani, whose duty it was to gather revenue from the provinces.

Outsiders to Rome had particularly good reason to quake at the arrival of the tax man. It is perhaps not surprising that many chose to hide their savings. Hundreds of astonishing hoards have been discovered in both Italy and the furthest reaches of the empire.

Ancient Britons, it would appear, were especially anxious to protect their wealth from grasping Roman hands. Our ancestors were so good at concealing their money that many of their troves are turning up only now, almost 2,000 years after they were first buried. One of the largest caches of silver and gold found anywhere in the Roman empire was dug up in Suffolk in 1992.

The so-called Hoxne Hoard contained almost 15,000 coins and 3.5 kg of gold. Another impressive trove, consisting of a record-breaking 70,000 coins and precious jewellery, was uncovered on Jersey just eight years ago. At least one of the coins embedded within it came from the English mainland.

The appeal of offshore banking on the Channel Islands was evidently not lost on the ancients. It is not always clear why hoards were created. Some view them as offerings to the gods, or as forgotten loot, but there is good reason to think that many hoards were deposited for reasons of tax evasion.

It is telling that several of the largest date to the most febrile times in Rome’s history. Coins from the third century, a fraught period of political upheaval, are especially common in hoard finds. One of the benefits of the currency being based on coinage rather than paper was that people could stow their savings underground over the course of their lifetimes.

Provided they remembered where they had put them, they could dig them up in times of need, or simply dip into them regularly as you might dip into a bank account. Given that present-day government ministers have recently announced plans to classify bronze and other artefacts as ‘treasure’, we can anticipate a growing interest in other kinds of secret trove in the coming years.

There were of course more creative ways of protecting wealth than consigning it to the earth. We read of wealthy equestrians investing their money or growing it through charitable schemes.

One senator put it on record that he had released some of his property to an agent at a rent of 30,000 sesterces a year, providing him with a return of 6 per cent on the 500,000 he had pledged to support the education of local schoolchildren.

His would not have been an unusual venture. One might argue that things remain the same in other respects too. Cash-rich Romans are still keeping the tax man on his toes today – Italy was recently revealed to be home to the highest level of VAT evasion in the EU.

Intriguingly, an appeal to the Italian people in 2015 resulted in the recovery of an astonishing €14.9 billion in unpaid tax. Now that’s a hoard the Romans would be proud of.