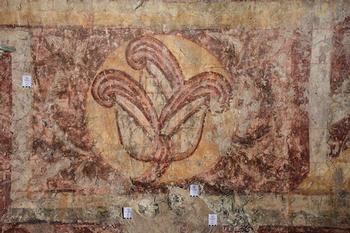 Conservators Say Murals in a Bavarian Church Date Back 1,000 Years, Making Them Among the Oldest Christian Artworks in Europe

More than 80 years ago, workers in a cathedral in the Bavarian city of Augsburg uncovered a previously unknown pair of murals depicting the life and death of St. John the Baptist. But exactly how old the murals were remained a mystery—until now.

The frescoes, it turns out, date back to the building of the cathedral some 1,000 years ago, making them perhaps the oldest medieval Christian artworks ever discovered north of the Alps.

“The new findings… are proof of the magnificent design of this spiritual place over the centuries,” cathedral official Armin Zürn said in a statement upon the announcement of the discovery by the Bavarian State Office for Monument Preservation.

Located on the upper walls of the cathedral’s southern transept, the murals were hidden for centuries behind layers of overpaint until they were uncovered during a restoration effort in the 1930s.

In 2009, the roof of the church underwent renovation, allowing researchers the opportunity to clean and study the frescoes for the first time, whereupon they learned that the pictures were likely painted shortly after the church was built. A mural discovered in the southern transept of the Augsburg cathedral. Photo: Angelika Porst.

At that time, 11 years ago, it was believed the church of Augsburg was erected in 1065 AD. But according to the Art Newspaper, recent dendrochronological testing has dated the wood in the masonry to 1000 AD—a small but significant difference.

“The oldest frescoes are the first layer above the masonry, and are therefore part of the original decor of the church,” a representative for the Bavarian State Office told the Art Newspaper. “We can assume that in the case of an important Episcopal church, the frescoes would have been painted soon after the construction, so soon after AD 1000.”

Though heavily faded, conservators believe that one of the murals illustrates the execution of John the Baptist, the preacher thought to have baptised Jesus, while the other depicts his burial. A third painting portraying the saint’s birth may have been destroyed with the construction of a Gothic window in the 14th century, experts told the German news outlet DW.

The frescoes recall those located in the Church of Saint George on the southern German island of Reichenau, which are also believed to have been painted around the dawn of the 11th century. The island was designated a UNESCO World Heritage Site in 2000 in part because of the significance of its murals.