Museum tours on your mobile phone 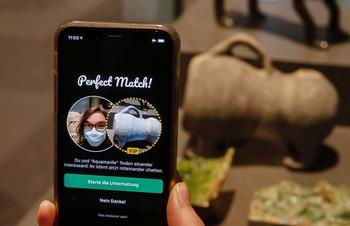 Museums Are Selling Virtual Classes and Tours to Boost Revenue During the Pandemic. Here’s What They’ve Learned About What Works

Some museums hope that they can harness a new stream of funding from their audiences online.

Since the pandemic first forced museums into lockdown last spring, a growing number of institutions have been trying to supplement lost income by selling tickets to experience their exhibitions online. If successful, the business model could provide a new source of revenue in the future and support further digital investment.

But, let’s face it—it’s a hard sell. To audiences used to experiencing museum objects in full IRL splendor, a wander around the Google Street View version of the Temple of Dendur is unlikely to measure up. And it’s equally tough to imagine an audience that isn’t your typical museum-going public ponying up $10 to watch a video of a curator walking through an exhibition when there are more sophisticated offers competing for their attention (and their dollars) online.

Nevertheless, the exceptional circumstances have forced museums to plumb the depths of their revenue-generating capacity. With millions of people bored and stuck indoors—last March, visitors to the Louvre’s website increased more than tenfold, while visitors to the British Museum’s website were up 137 percent—many have looked to capitalize on the increased online traffic.

In the UK, where most museums rely on at least some degree of government support, institutions have had an extra incentive to experiment with new business models. In a leaked letter from the culture secretary to museums last August, Oliver Dowden warned that if institutions did not show that they were “pursuing every opportunity to maximize alternative sources of income,” the government would perhaps reconsider further financial support to the sector.

So far, the experiments have had mixed results. London’s Design Museum has managed to sell more than 5,000 tickets for its online programs since the first lockdown in March. Today, online visitors can access a virtual walkthrough of its electronic music exhibition for £7, and for £5 can immerse themselves in a 360-degree digital version of the museum and “walk around” its “Designs of the Year” exhibit. The museum is also offering tickets (usually priced around £5) to its program of talks and other live events.

The strategy has generated “much needed income to support the museum during closure,” a spokesperson for the museum tells Artnet News.

Meanwhile, the Metropolitan Museum in New York has found some success with a program of paid virtual tours it launched in June. The 60-minute group tours include live discussions around a collection-based topic or special exhibition, and cost $300 per group of up to 40 people ($200 for students). Between July and December, the museum served some 116 groups with this option, generating between $23,000 and $34,000. In the same time period, it ran 156 of its 45-minute tours for younger school groups, which cost $200 per class (and was free for New York public schools).

It’s unclear whether other museums’ virtual tours are getting the same traction. Despite saying it was “popular” and “doing well,” a spokesman for London’s National Gallery declined to share numbers for the uptake on its £8 online tour of its Artemisia Gentileschi exhibition that launched in December. And it’s hard to see these virtual tours holding the same allure once people return to museums in person. Street view of the Kunsthistoriches Museum in Vienna on Google Arts and Culture.

Cashing in on Expertise

As the pandemic wears on and virtual learning becomes a growing part of everyday life, museums are also seeing potential in monetizing their educational expertise through their online offerings. The Met saw an additional boost in income last year by offering paid online classes for children and adults, and its latest round of studio workshop and art history courses sold out in days.

Elsewhere, the Barnes Foundation in Philadelphia rushed to move its in-person adult education classes in art and art history online at the onset of the pandemic. The live online classes proved incredibly popular, and have raised more than $600,000 since their launch last March—more than double the revenue that in-person classes generated in 2019.

The institution’s chief of business strategy and analytics, Will Cary, tells Artnet News that the Barnes was “surprised” at the interest in online classes, which, aside from making up for lost revenue from admissions and events, helped it connect with more students than ever. Between April and December, more than 2,600 students from 39 states and six countries took classes, and 60 percent of that enrollment was from students who had never taken a Barnes class before. Get With the Gamers

The forced online migration last year was an opportunity for institutions and audiences to test out the digital waters, and their experiments have shown some potential. But if they want to cement their digital content as a source of income in future, they need to be thinking strategically about how to keep their visitors coming back (and attracting new audiences).

While the phrase “virtual museum tours” was among the most Google searched of 2020, the interest peaked sharply in March, perhaps as the novelty of clicking around a virtual gallery wore off. It’s worth noting, however, that search interest in “virtual learning” did not see as sharp of a drop off, indicating that there is more potential for sustained interest in online learning.

But museums need to be thinking outside the box if they hope to continue engaging consumers to invest in their online content. “There certainly is potential for digital experiences as alternative revenue streams for museums, but they need to get better,” Erinrose Sullivan, head of museums and cultural heritage at SO REAL, a tech company that offers 3D scanning and conversion services, tells Artnet News.

Museums might do well to take cues from other industries. “Gaming is a prime example,” Sullivan says, pointing out that three of the most popular video game franchises–Assassin’s Creed, Tomb Raider, and Uncharted—have core history-driven storylines that engage and excite consumers enough to keep playing. Assassin’s Creed even offers something close to what museums are trying to do now in its “Discovery Tours,” which allow the user to travel the game’s virtual world and experience culturally important sites. Museums could also create digital experiences that go beyond imitating the in-person museum experience online. Some have already been experimenting with this idea, including the Uffizi Galleries, which unveiled a murder-mystery video game set at the Pitti Palace Museum in 2019.

Sullivan cites the game Avakin Life, a type of Second Life virtual universe where you can pick out clothes and furnishings for your space, including artwork. “I own two Paul Klee pieces in there, something simply not possible in the real world,” Sullivan says. “Artwork could be incorporated into a game that can enrich a player’s online life and even play an integral role in the experience itself, an incredibly exciting way to bring in a new generation of art lovers.”

And if museums are thinking about the digital as a way to generate additional revenue, they could also be looking beyond the pockets of their visitors for returns. Sullivan’s company uses technology to create “digital twins” of the items in museum collections, which could then be licensed to third parties such as the gaming or movie industries.

That approach could “harness a whole new set of funding, while at the same time raising awareness of collections to new audiences,” Sullivan says. “As the world becomes more digital, there are lots of financial opportunities. Museums just need to look at how they harness that in new ways.”