Julien’s Auctions is selling off the museum's entire collection 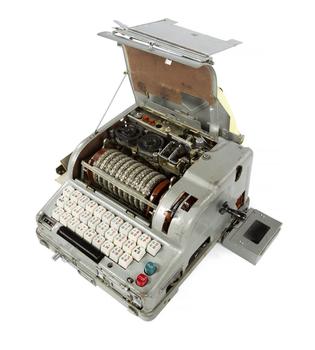 New York’s Shuttered KGB Museum Is Auctioning Off Its Entire Collection of Spycams, Poison Containers, and Lenin Art This Weekend

The entire collection of New York’s short-lived KGB Museum, which opened in 2019 but has shuttered due to the pandemic, is heading to the auction block this Saturday.

What’s on offer? Among the pricier items is a “Fialka” machine, used by the Russians to decrypt Enigma-coded messages (estimated to go for up to $12,000). There’s also a spy ring with a hidden camera (estimated at up to $7,000) and a half-ton stone sculpture of Lenin, which decorated the KGB’s Kaliningrad headquarters (up to $7,000).

If you don’t have quite that much to spend, there’s also a reproduction of the carved wooden American Great Seal plaque given to the US ambassador to Russia in 1945 by the Russian Boy Scouts, which harbored a listening device. Its existence came out during court proceedings after Russia shot down an American U2 spy plane in 1960 (estimate: $5,000). Mitchell Kaba, Julien’s director of street and contemporary fine art, has been immersed in the sale material for a couple of months, and pointed out in an interview that collectors in many categories, including history buffs, students of technology history, and fans of military organizations might find the sale appealing. But considering how crucial surveillance was to the KGB’s operation, perhaps the most interested parties would be camera collectors.

Indeed, antique surveillance tech abounds. “There are a lot of steel-wire recorders,” said Kaba. “These were tape recorders before tape. They use a spool of magnetized steel wire that is thinner than a human hair. It looks like a spool of fishing wire.” These devices could record an hour or so on one small reel, and the collection includes many hours of unknown recordings. “They were made in a special KGB workshop,” Kaba said. “A lot of them are unique, and so the controls are hand-engraved—like, someone just took a tool and wrote ‘This is the stop button!’” All the hidden compartments and handmade objects can even seem a bit ridiculous, Kaba points out, given the increases in technology since then.

The sale comes at a moment when Russia has been top of mind in the US for some four years. But even if rumors of Trump’s cavorting with prostitutes in a Moscow hotel room remained unproven, Maria Butina, a Russian spy who mingled with the NRA and pleaded guilty to conspiring to act as a foreign agent in 2018, was definitely real. So was the murder of former Russian spy Sergei Skirpal with a nerve agent in England that same year. (In the plus ça change realm, the sale includes a reproduction umbrella with hidden syringe for delivering poison, of the type believed to have been used to carry out the 1978 assassination of dissident Bulgarian writer Georgi Markov in London, for $2,000-$3,000.)

The KGB inventory is part of a sale of Cold War memorabilia, which could fetch a total of $700,000. So if you’ve got a taste for items owned by Fidel Castro, the isolation system transporter used by the famous “boy in the bubble,” or test film footage of NASA astronauts, this is one to watch.