Industry leaders have welcomed the news, but stress the need for sustained financial support. 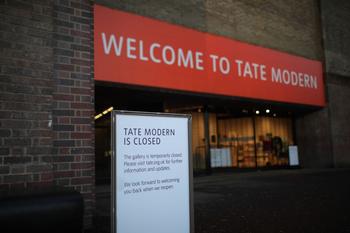 The struggling UK culture sector is getting another lifeline. Today, the government announced £485.8 million (around $677 million) in additional financial support for the arts as part of a broader plan to reboot the pandemic-battered economy.

The UK’s economy shrunk by 10 percent in 2020, the largest contraction in 300 years. Chancellor Rishi Sunak has forecast the economy is likely to return to pre-shutdown levels by the middle of 2022. The new measures to boost the arts sector were announced alongside other cross-sector initiatives, including an extension of the government’s furlough program, the establishment of a recovery loan program, and the launch of eight freeports.

Ahead of the budget statement, Sunak acknowledged that the arts and culture industry is a “significant driver” of economic activity, employing more than 700,000 people across the UK. “I am committed to ensuring the arts are equipped to captivate audiences in the months and years to come,” he said.

The cash infusion includes some £408 million for England, including an extra £300 million to the £1.57 billion Culture Recovery Fund, £90 million to support its locked-down national museums, and £18.8 million to fund other community cultural projects. The government will give an additional £77 million to the devolved administrations of Scotland, Wales, and Northern Ireland to support their own culture sectors.

The director of the London-based charity Contemporary Art Society, Caroline Douglas, welcomed the additional funding. “The arts in this country are vitally important to our sense of identity, and will play a key role in the way we come out of this crisis,” Douglas told Artnet News.

But she was less certain of whether this aid would be enough to keep institutions afloat until they are allowed to reopen their doors on May 17.

“For museums the past year has been a financial car crash,” Douglas said. “For years, they have been urged to be more entrepreneurial, more imaginative in the way they generate income, and become less dependent on state subsidy. Business models that relied on generating ever-larger audiences, on ticket sales for temporary exhibitions, and other commercial activity are having to be overhauled.”

The sector, she notes, has a tough two to three years ahead. “It is not just a question of surviving until the reopening, because we know that life is not just going to snap back to pre-pandemic levels of activity this summer.”