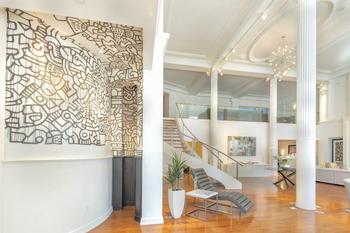 This $7.9 Million Tribeca Loft Comes With Its Own Keith Haring Mural, Painted While He Was a Student at SVA

One of the nicest things about moving into a new apartment is deciding where to hang the art. But one triplex newly on the market for $7.9 million in Tribeca will save its future owner some of that mental effort—because it comes with a Keith Haring mural already painted on the entryway.

The mural, which dates from Haring’s days as a student at New York’s School of Visual Arts, in 1979, was rediscovered in the 8,000-square-foot home 20 years ago. Architects Todd Ernst and Frank Servidio were building the apartment at 260 West Broadway in 2001 when they heard that SVA once used the space as a gallery, and that the soon-to-be-famous tyro had created an artwork there. Sure enough, they found it behind a closet where the owners were storing their coats and AV gear.

“It was like discovering an Egyptian tomb,” Ernst told New York magazine when the apartment first came on the market in 2008. “The fact that it actually survived is amazing,” said Ernst. “It’s next to a sprinkler pipe and it’s made of shoe polish and alcohol, and it’s water soluble.” The owner hoped to take the art with her when she moved, but she was out of luck, as it’s painted on a concrete wall that can’t be moved. (Obviously, potential buyer, this means that you, too, will have to walk away from the work if you move on.)

Brown Harris Stevens is offering the two-bedroom, three-and-a-half bath loft, which, besides the art, features a 45-by-45-foot great room with 26-foot ceilings, eat-in chef’s kitchen, media room, game room, gym/office with half bath, and climate-controlled wine cellar, among other features.