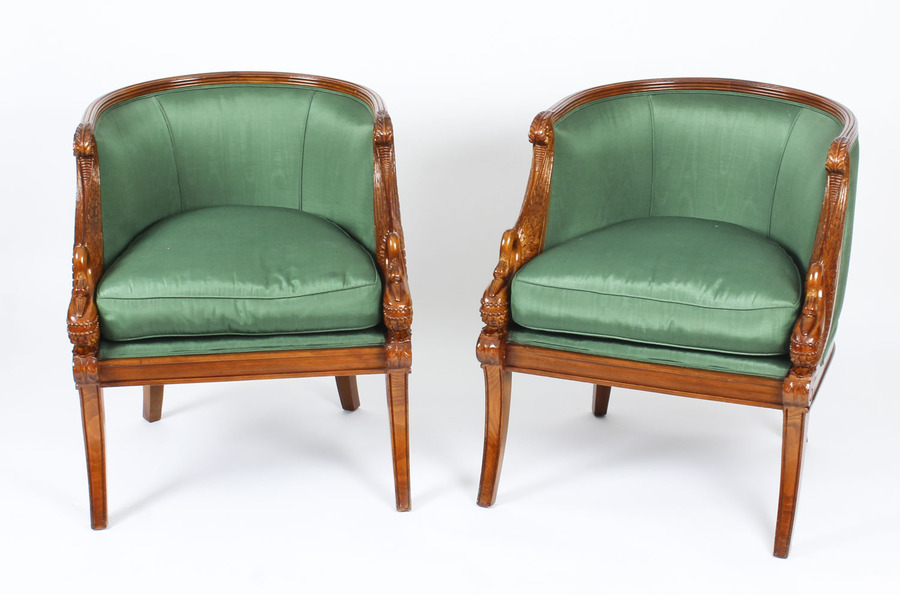 Regent Antiques Limited has 939 antiques for sale.
click here to see them all

This is a beautiful pair of hand carved solidwalnut French Empire Revival armchairs, dating from the second half of the 20th Century.

They have beautifully carved swan armrests and raised on front sabre legs.They are beautifully upholstered in green silk with loose seat cushions and are really comfortable and ready to grace your drawing room.Add an elegant touch to your home with this exceptional pair of armchairs.Condition:In excellent condition having been beautifully cleaned and waxed in our workshops, please see photos for confirmation. Dimensions in cm:Height 80 x Width 69 x Depth 76Dimensions in inches:Height 2 foot, 7 inches x Width 2 foot, 3 inches x Depth 2 foot, 6 inches
Our reference: A1275
Empire style,is an early-19th-centurydesignmovement inarchitecture,furniture, otherdecorative arts, and thevisual artsfollowed in Europe and America until around 1830.The style originated in and takes its name from the rule ofNapoleon Iin theFirst French Empire, where it was intended to idealize Napoleon's leadership and the French state. The style corresponds to theBiedermeierstyle in the German-speaking lands,Federal stylein the United States and to theRegency stylein Britain. The previous style was calledLouis XVI style, in France.The Empire style was based on aspects of the Roman Empire. It is the second phase of neoclassicism which is also called "Directoire", after a goverment system.
Furniture typically had symbols and ornaments borrowed from the glorious ancient Greek and Roman empires.The furniture was made from heavy woods such asmahoganyandebony, imported from the colonies, with dark finishes often with decorative bronze mounts. Marble tops were popular as were Egyptian motifs like sphinxes, griffins, urns and eagles and the Napoleonic symbols, the eagle, the bee, the initials "I" and a large "N."
Gilded bronze (ormolu) details displayed a high level of craftsmanship.

Regent Antiques Limited has 939 antiques for sale.
click here to see them all