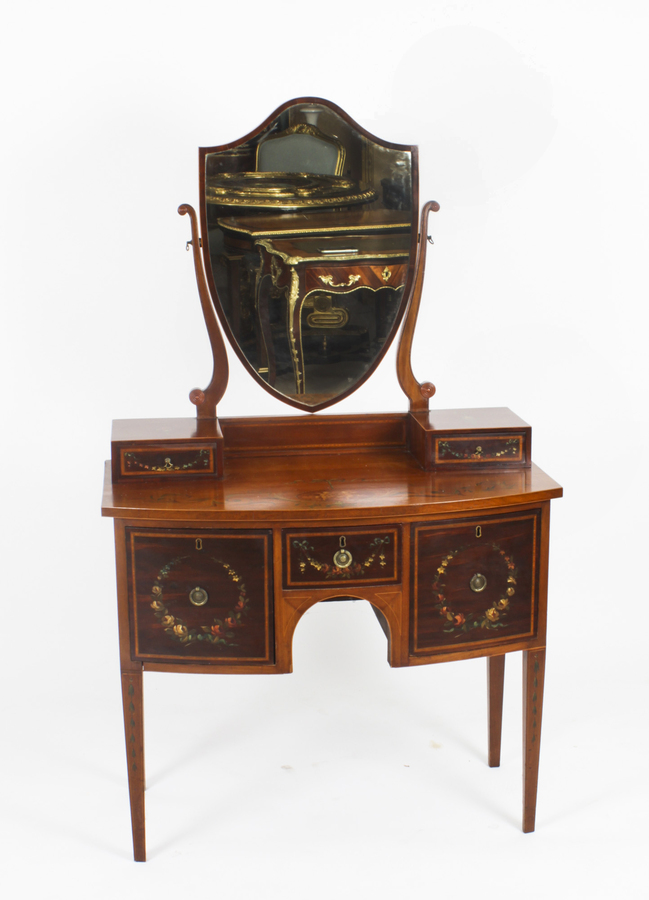 This is a totally fabulous antique late Victorian hand painteddressing table, Circa 1880 in date.

The mahogany dressing table features satinwood cross banding and hand painted decoration in the manner of Angelica Kauffman, of playful cherubs, ribbons, garlands and bouquets of flowers.It has a shield shaped adjustable mirror on a shaped top with two small drawers over three drawers and a shaped knee hole and it is raised on square tapering legs.There is no mistaking its superb quality and fantastic design, which alone is certain to make this set a talking point in your home and become a treasured addition to the furniture in your bedroom.Condition:In really excellent condition having been beautifully cleaned, polished and waxed in our workshops, please see photos for confirmation.
Dimensions in cm:Height 154 x Width 92 x Depth 51Dimensions in inches:Height 5 feet, 1 inch x Width 3 foot x Depth 1 foot, 8 inches
Our reference: A2638
Angelica Kauffman,RA(1741 - 1807)
was aSwiss-bornAustrianNeoclassicalpainter who had a successful career in London and Rome. Though born as "Kauffmann", Kauffman is the preferred spelling of her name in English; it is the form she herself used most in signing her correspondence, documents and paintings.While Kauffman produced many types of art, she identified herself primarily as a history painter, an unusual designation for a woman artist in the 18th century.History painting, was considered the most elite and lucrative category in academic painting during this time period. Under the direction of SirJoshua Reynolds, the Royal Academy made a strong effort to promote history painting to a native audience who were more interested in commissioning and buying portraits and landscapes.Despite the popularity that Kauffman enjoyed in British society and her success as an artist, she was disappointed by the relative apathy that the British had towards history painting. Ultimately she left Britain for the continent, where history painting was better established, held in higher esteem and patronized.The works of Angelica Kauffman have retained their reputation. By 1911, rooms decorated with her work were still to be seen in various quarters. AtHampton Courtwas a portrait of the duchess of Brunswick; in theNational Portrait Gallery, a self-portrait.There were other pictures by her at Paris, atDresden, in theHermitageatSt Petersburg, in theAlte PinakothekatMunich, inKadriorg Palace,Tallinn(Estonia).Mahogany
is probably one of the largest ‘families' of hardwood, having many different varieties within its own species.Mahogany has been used for centuries in ship building, house building, furniture making etc and is the core structure of just about every 19th century vanity box, dressing case or jewellery box. It became more of a Victorian trend to dress Mahogany with these decorative veneers, such as Rosewood, Kingwood, Burr Walnut and Coromandel, so that the actual Mahogany was almost hidden from view.Mahogany itself is a rich reddish brown wood that can range from being plain in appearance to something that is so vibrant, figured and almost three dimensional in effect.Although Mahogany was most often used in its solid form, it also provided some beautifully figured varieties of veneer like ‘Flame' Mahogany and ‘Fiddleback' Mahogany (named after its preferred use in the manufacture of fine musical instruments).Cuban Mahogany was so sought after, that by the late1850's, this particular variety became all but extinct.