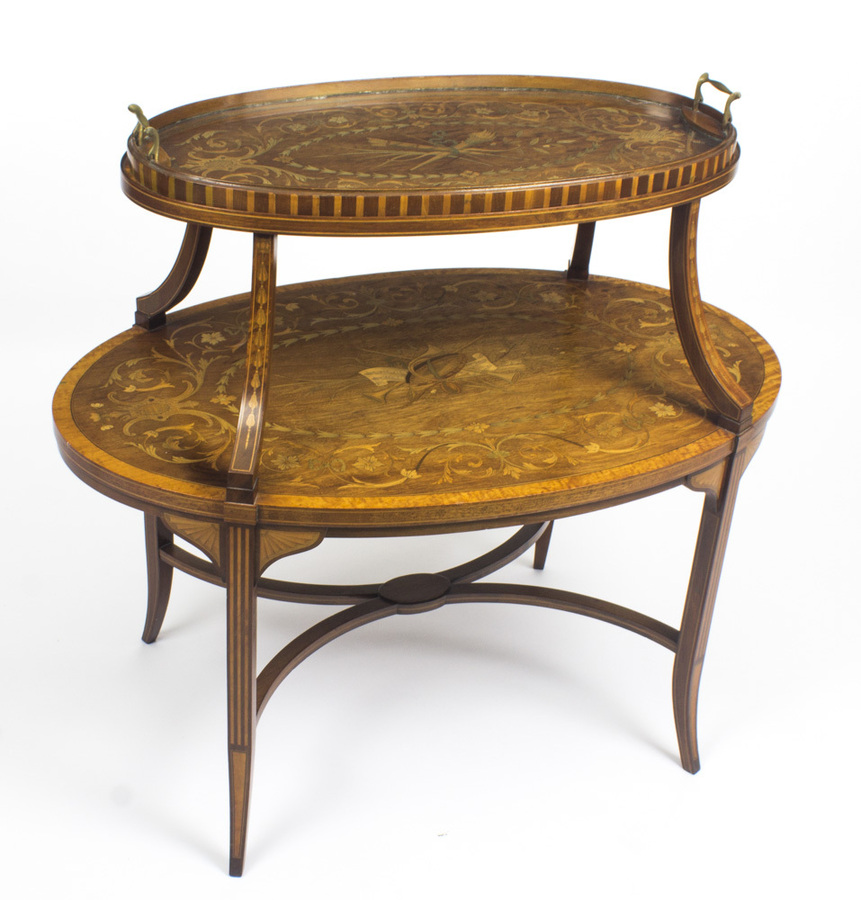 Crafted from the best flame mahogany, note the wonderful grain to the wood and the beautifully inlaid decoration with musical trophies within scrolling foliage and kingwood crossbanding.Masterfully inlaid with Sheraton influences, this etagere has an elegant refined look.The removable glass bottomed tray can be used to serve drinks, etc.It is raised on elegant square section tapering outsweptlegs with a shaped cross stretcher.The craftsmanship and finish are second to none.
Condition:In excellent condition having been beautifully cleaned and waxed in our workshops, please see photos for confirmation.Dimensions in cm:Height 84 x Width 89 x Depth 55Dimensions in inches:Height 2 foot, 9 inches x Width 2 foot, 11 inches x Depth 1 foot, 10 inches
Our reference: 08701
Edwards & Roberts
was founded in 1845, and had premises at 21WardourStreet London. By the 1892 they occupied more than a dozen buildings inWardourStreet, where they continued to trade until the end of the century.They became one of the leading London cabinet makers and retailers working in a variety of styles, both modern and revivalist. Their business also involved retailing, adapting and restoring the finest antique furniture and there are many examples of their earlier furniture with later embellishments bearing their stamp.
Edwards & Roberts specialised in marquetry, inlay and ormolu.
Marquetryis decorative artistry where pieces of material (such as wood, mother of pearl, pewter, brass silver or shell) of different colours are inserted into surface wood veneer to form intricate patterns such as scrolls or flowers.The technique of veneered marquetry had its inspiration in 16th century Florence. Marquetry elaborated upon Florentine techniques of inlaying solid marble slabs with designs formed of fitted marbles, jaspers and semi-precious stones. This work, called opere di commessi, has medieval parallels in Central Italian "Cosmati"-work of inlaid marble floors, altars and columns. The technique is known in English as pietra dura, for the "hardstones" used: onyx, jasper, cornelian, lapis lazuli and colored marbles. In Florence, the Chapel of the Medici at San Lorenzo is completely covered in a colored marble facing using this demanding jig-sawn technique.Techniques of wood marquetry were developed in Antwerp and other Flemish centers of luxury cabinet-making during the early 16th century. The craft was imported full-blown to France after the mid-seventeenth century, to create furniture of unprecedented luxury being made at the royal manufactory of the Gobelins, charged with providing furnishings to decorate Versailles and the other royal residences of Louis XIV. Early masters of French marquetry were the Fleming Pierre Golle and his son-in-law, André-Charles Boulle, who founded a dynasty of royal and Parisian cabinet-makers (ébénistes) and gave his name to a technique of marquetry employing shell and brass with pewter in arabesque or intricately foliate designs.Etagèreis a piece of lightfurniturewhich was extensively made in France during the latter part of the 18th century. It consists of a series of stages orshelvesfor the reception of ornaments or other small articles. Like thewhat-notit was very often cornerwise in shape, and the bestLouis XVIexamples in exotic woods are exceedingly graceful and elegant.
In modern usage, an étagère is often used to refer specifically to a long-legged shelf unit that fits over a bathroom toilet, also known as aspace saver.