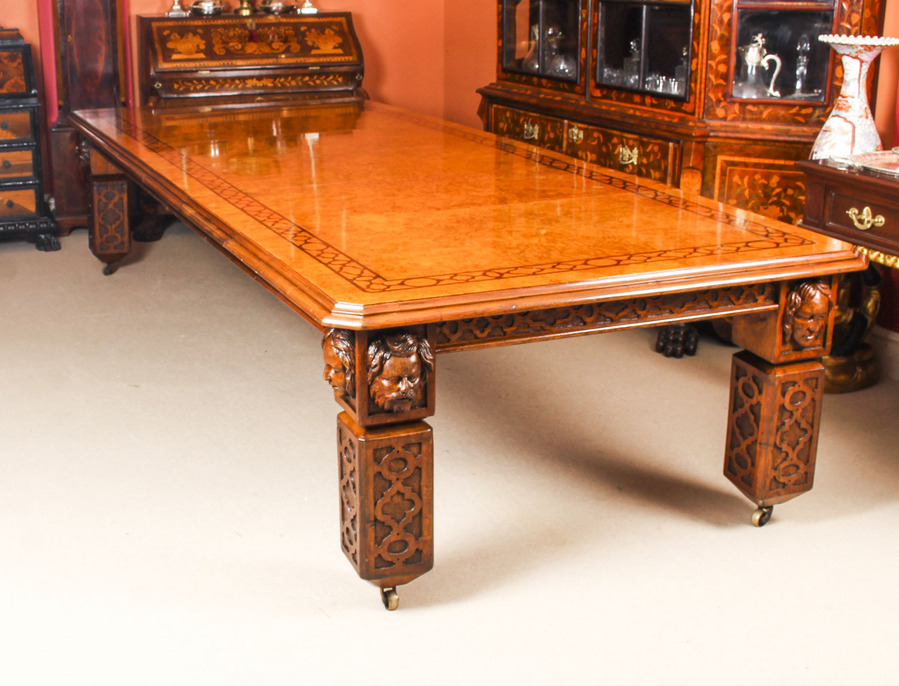 There is no mistaking the style and sophisticated design of this exquisite rare antique English Elizabethan Revival pollard oak extending dining table, circa 1850 in date.

The striking rectangular pollard oak top with canted corners, inlaid marquetry decoration to match the fret carved frieze, and a moulded edge over the already mentioned beautiful hand carved frieze.This majestic table has four leaf extensions, can comfortably seat fourteen and has been hand-crafted from solid oak which is not only strong, but has a beautiful grain. The top is in Pollard, oak with twin line inlaid marquetry decoration, which is seen in the intricate burr on the table top.The four leaf extensions can be added or removed as required to suit the occassion by a special winding mechanism.The table is raised on massive hand carved square section legs with blind fret moulding, headed by carved masks, and terminating in brass castors.This impressive dining table is exemplary of the early Victorian era with its Pollard oak and delicate inlaid marquetry. It will stand out in your dining or conference room and will become the key piece in your furnishing collection.Condition:In excellent condition having been beautifully cleaned, French polished and waxed in our workshops, please see photos for confirmation.Dimensions in cm:Height 77 x Width 360 x Depth 142-Fully ExtendedHeight 77 x Width 160 x Depth 142-With all leaves removedDimensions in inches:Height 2 foot, 6 inches x Width 11 foot, 10 inches x Depth 4 foot, 8 inches-Fully ExtendedHeight 2 foot, 6 inches x Width 5 foot, 3 inches x Depth 4 foot, 8 inches-With all leaves removed
Our reference: 09642
Pollard Oak
Pollarding is a pruning system in which the upper branches of a tree are removed, promoting a dense head of foliage and branches. It has been common in Europe since medieval times and is practised today in urban areas worldwide, primarily to maintain trees at a predetermined height. The bole of the tree, constantly cut back over a period of years, will eventually form a lump, or ‘burr', which when sawn for veneer, gives a lovely grained, swirling figure.
The effect is similar to that of burr walnut with its distinctive speckled grain. Burrs, or ‘burls', are growths which appear on the side of tree trunks, resulting from a tree undergoing some form of stress. They may be caused by an injury, virus or fungus.
During the 19th century great strides were made in the mechanisation of cabinet making. Marc Isambard Brunel [ Isambard Kingdom's father] built the first steam driven saw mill, and invented a circular saw that could be used to cut veneers thinly and evenly for the first time. He also developed the first hydraulic veneer press. The figured wood cut from burrs and pollards is notoriously difficult to cut and lay: the wild grain which makes it so attractive results in a very delicate, brittle veneer. The new machines enabled the Victorian craftsmen to make the most of these beautiful timbers.Winding Mechanism for extending tables
Winding mechanisms were invented in the early 19th Century.
A man by the name of Samuel Hawkins applied for a patent on a screw expander on June 6th, 1861. Presumably, Mr. Hawkins either died or retired because his business was taken over by a young machinist named Joseph Fitter in 1864.
Joseph Fitter operated a machinist shop where he produced winding mechanisms for extending tables as well as screw expanders for piano stools and other applications at 210 Cheapside, Birmingham England by the name of Britannia Works.