Antique Unique Writing Desk with a Marquetry in the Boulle Style | ANTIQUES.CO.UK |

unique writing desk with a marquetry in the boulle style 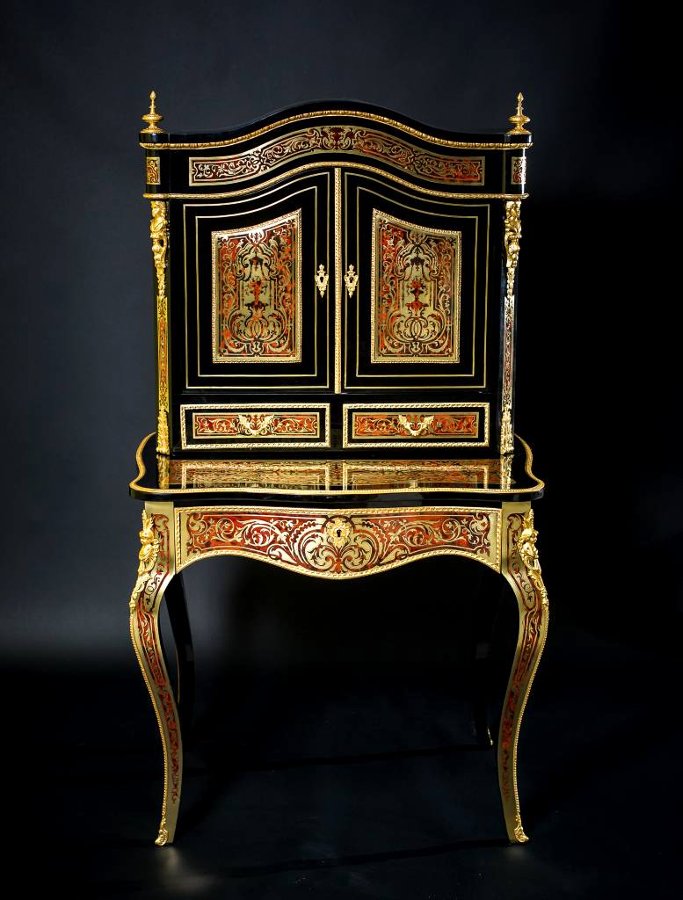 Monika Grudniok has 206 antiques for sale.
click here to see them all

A writing desk manufactured in France, circa 1840, which resembles the 17th-century, Baroque style of furniture ornamentation, typical for the Boulle technique. The framework of this piece of furniture is entirely oaken, covered from the outside with a black French polish, so called “English soot”, and is decorated with an elaborate marquetry in the Boulle style.

This French, 19th-century furniture should not be only associated with a decorative value, but also with ideal proportions and craftsmanship.The bottom section of the writing desk has a wavy top with a profiled molding. Additionally, the whole section is supported on S-shaped legs.The upper section is in the form of a setting with a pair of doors, and two drawers and an original shelf. The marquetry is made of a flat, patterned decoration of tortoiseshell, inlaid with brass with a motif of vine. Embossed moldings, escutcheons and appliqués add to the splendid of this piece of furniture.The craftsmanship and the type of ornamentation make this writing desk unique, and exceptional.The furniture is in very good condition. It has been covered only with wax.Boulle’s technique – historical overviewThe name of the technique derives from the last name of the French artist-carpenter, André-Charles Boulle, who lived in the years 1642-1732. In truth, this marqueterie technique had been discovered by an artist who had been creating before Boulle, Pierre Golle, but it was Boulle who improved it, and was the most proficient in it.The technique was that a pattern drawn on paper was redrawn onto tightly adjacent sheets of brass and tortoiseshell, and then the pattern was cut out with a special saw. Obtained in this way weretwo patterns: first, cut in tortoiseshell inlaid with brass (Premier batches), and second, a negative of the former, cut in sheet brass inlaid with tortoiseshell (Contre parties).On the one hand, fragments made of brass were usually
shaded with engraved lines to achieve the effect of three-dimensionality.
On the other hand, tortoiseshell was often dyed red or blue, by placing paper dyed in the color under the veneer on the main body of the furniture.Furniture like this was synonymous for luxury, and only a few among the aristocracy circles of Louis XIV could afford it.THE AUTHENTICITY (period of origin, type of material used in manufacturing) has been confirmed by an experienced expert in vintage and antique items. Antique Beauty company issues CERTIFICATE OF EXHIBITOR on presented item, which confirms its authenticity, legal origin, the approximate date and place of the furniture manufacturing.

Other antiques available from monika grudniok

Monika Grudniok has 206 antiques for sale.
click here to see them all