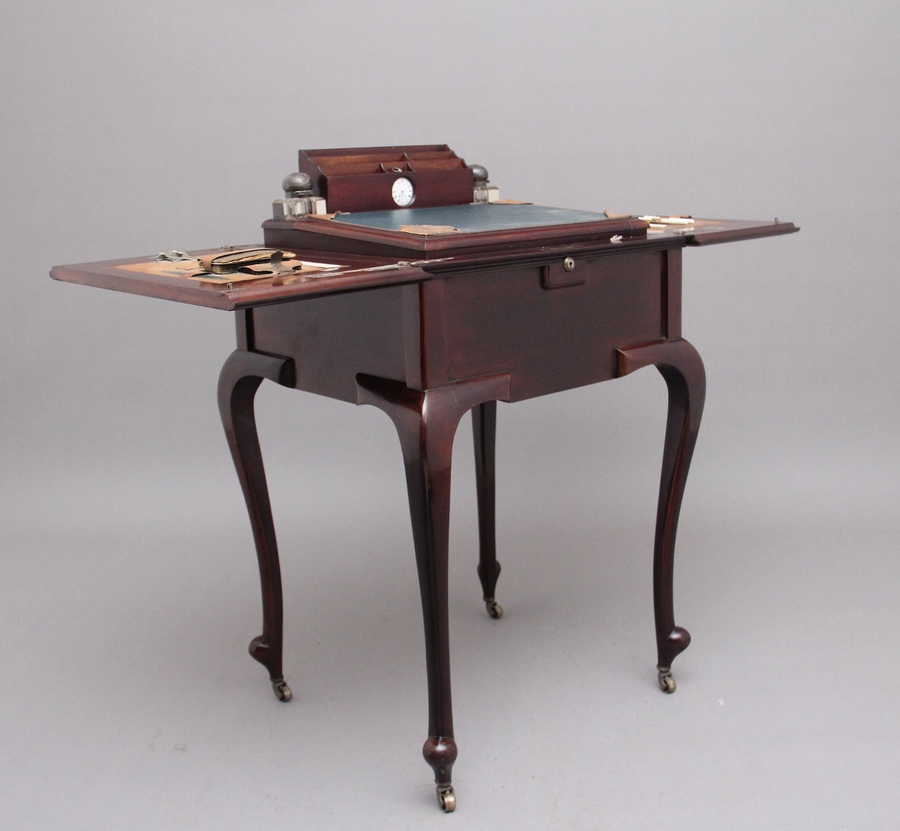 Early 20th Century mahogany metamorphic writing table by J.C Vickery of Regent St, London, the moulded edge hinged top lifting up and folding over to reveal the rising writing desk top, which consists of various writing instruments including ink wells, various compartments and a time piece, the writing slope also lifts up to reveal further storage space, the underneath of the writing slope is marked “J.C VICKERY” Standing on elegant cabriole legs. Circa 1910.

JC Vickery is a British consumer goods company founded in 1890 London. John Collard Vickery and his then partner, Arthur Thomas Hobbs, bought up the long established business of William Griggs, a stationer and bookseller at 183 Regent St in 1890. William Griggs had been at 183 Regent St as early as 1843 and in 1854 when they took over they expanded the stock to include jewellery, dressing cases, gold and silver lines. Continuing alone after 1891, Vickery extended his premises to 1900 to 179, 181 and 183 Regent St, with showrooms to the rear of 1 New Burlington Place. 22” x 21” x 31” high56cms x 53cms x 79cms high

Martlesham Antiques. We are based just ouside Woodbridge in Suffolk. We have been trading since 1984 and have the largest showrooms in the area, mainly specialise in 18th and 19th century antique furniture antique mirrors . You can also view our collection at martleshamantiques.com Tel - 01394 386732 Mobile - 07889724434 Email - martleshamantiques@btconnect.com

Other antiques available from martlesham antiques