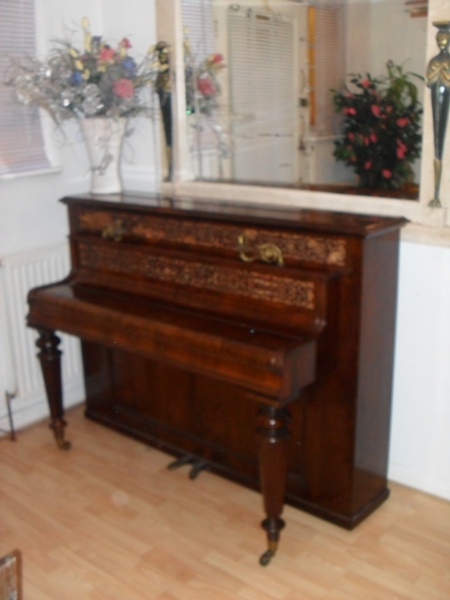 Regal Antiques has 6 antiques for sale.
click here to see them all

Working but would need some restoration to bring it back to its former glory Requires some TLC to hammers which operate 7 keys and upper fretwork. Some markings which commensurate s with age (over 130 years old
Erards HIstoryErard is the oldest and most prestigious French piano manufacturer. The firm was founded by Sebastian Erard who built his first piano in 1777 in Paris. Erard's fame spread and royal commissions followed for Louis XVI and Marie Antoinette. This, however, was not a plus for Erard during the French Revolution. He was obliged to leave the country and he relocated to London where he set up operations in 1792. He later returned to Paris and began production there as well, only to suffer restrictions due to the Napoleonic Wars.
Pierre Erard, Sebastian's nephew, took charge of the business in 1834. Instruments were manufactured in London until 1890 while production continues in France today. Erard merged with Gaveau in 1959. Throughout its long history, Erard has been acclaimed for pianos of the highest quality. Erard pianos were favored by Haydn, Beethoven, Mendelssohn, Liszt, and of course, Paderewski.Source:http://www.pianogrands.com/pianos/erard/erard.htm

Other antiques available from regal antiques

Regal Antiques has 6 antiques for sale.
click here to see them all