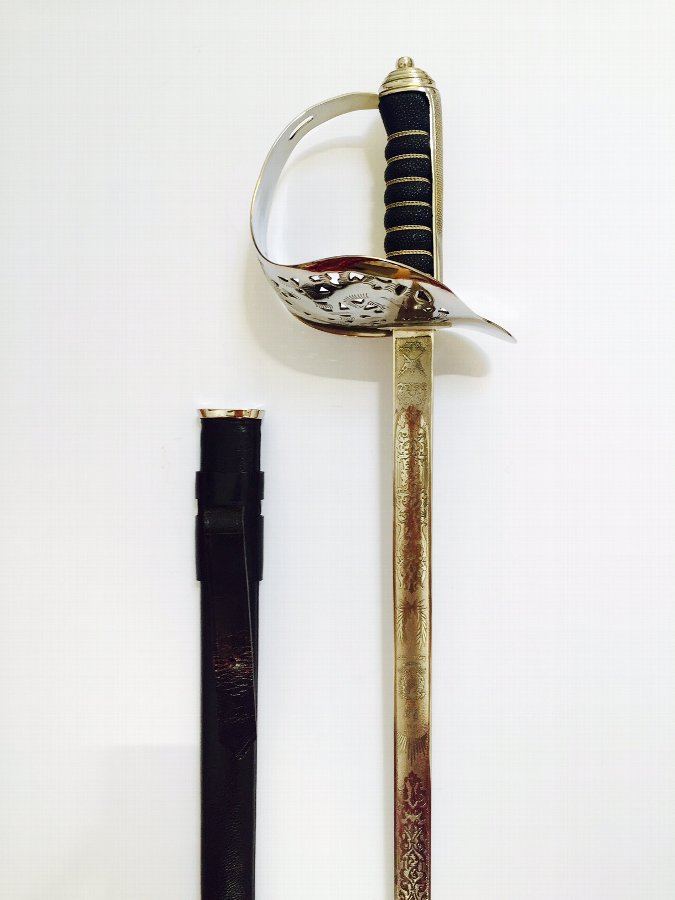 Crown Swords England has 4 antiques for sale.
click here to see them all

Based on the 1897 pattern infantry officers sword, the Royal Marine Officers Sword is a straight-bladed, three-quarter basket hilted sword that has been the regulation sword for officers of the line infantry of the British Army from 1897 to the present day.

The Royal Marine officers sword is embossed beautifully with unmistakable Globe and Laurel and the title
"HM Royal Marines"
The blade is described in the pattern as being 32 1/2 inches (830 mm) long and 1 inch (25 mm) wide at the shoulder, with the complete sword weighing between 1 lb 12oz.
The blade is  both straight and symmetrical in shape. A thick and strong blade has a deep central fuller on each side and is rounded on both its edge and back towards the hilt, giving a “dumbbell” or “girder” cross section.
Through a gradual transition, the blade becomes double edged towards the tip. The blade is decoratively etched on both sides.
The guard is a three-quarter basket of pressed, plated steel. It is decorated with a pierced scroll-work pattern and has the royal cipher set over the lower knuckle bow.
The grip is beautifully crafted in black dyed shark skin and then intricately wrapped with silver wire. The grip is straight, creating no offset to the blade.
The swords design demonstrates a number of features that distinguish this sword as a thrusting weapon. The spear point and double edge towards the point aids penetration and withdrawal. The blade, whilst quite narrow, is thick and its dumbbell section gives the sword superior strength. The blade tapers in both width and thickness and, with the substantial guard, has a hilt-biased balance, aiding agility at the expense of concussive force in the cut.

Crown Swords England has 4 antiques for sale.
click here to see them all