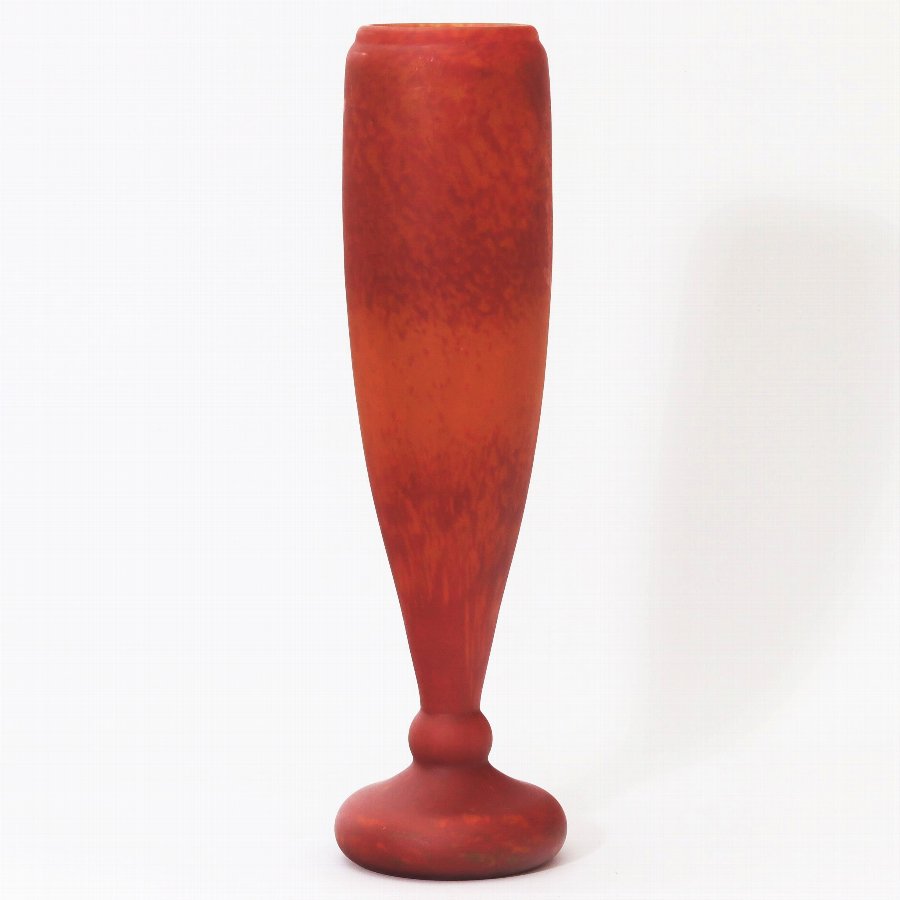 Antique Ethos has 89 antiques for sale.
click here to see them all

Superb statement piece of pâte-de-verre glass from Daum c1910. Tall elongated upper body with turned-in rim, waisted lower body and shaped foot. Gorgeous tonal orange/reds and yellow with frosted exterior. Its heavy foot ensuring stability. Etched signature "Daum Nancy" with the Cross of Lorraine. The vase measures 45 cm in height.
The vase is in very good condition with no cracks or chips. Exceptionally minor signs of age and use. Virtually imperceptible 'bruise' to its rim which is just visible in the last image. A stunning decorative piece. Please see further images on our website as these form an important part of the description.

In the late 1870s Jean Daum accepted a struggling glassworks in lieu of debts owed him, but it was Jean’s sons (Auguste and Antonin) who took charge of operations – transforming it into one of France’s celebrated art glass producers. By 1893 the Daum brothers exhibited their Art Nouveau cameo glass at the World Exposition in Chicago. These exhibited pieces gave Daum international recognition placing them alongside contemporaries such as Tiffany and Gallé. Daum continued to distinguish themselves by their constant innovation in both finish and design – producing an array of art glass through variations in acid-etching, wheel-turning and enamelling. In 1900 Daum received further acclaim, winning a ‘Grand Prix” at the Exposition Universelle in Paris. In keeping with their innovative drive, Daum invested in pâte-de-verre or “glass paste” casting in 1906 – a technique with roots dating back to the ancient world. The pâte-de-verre method involves placing glass fragments in a mould which is then heated and compressed into a variety of forms. In their hay-day Daum engaged and employed skilled artists who would later be famous for their own works, namely the Schneider Brothers. Henri Berge, Bernard Gruber, Eugene Gall, and Amalric Walter. The glassworks shut during WWI, opening again in 1918. The output of Daum between the wars under the direction of Paul Daum was just as innovative as that before 1914. It can be best summarised by three styles. The "majorelle" type glass vases in which glass is blown into a wrought iron or bronze armature. Striking designs deep acid-etched on thick walled glass and finally elegant thinner walled vases with acid frosted bands of decoration. By the end of WWII Daum moved to making only crystal art glass.

Antique Ethos has 89 antiques for sale.
click here to see them all