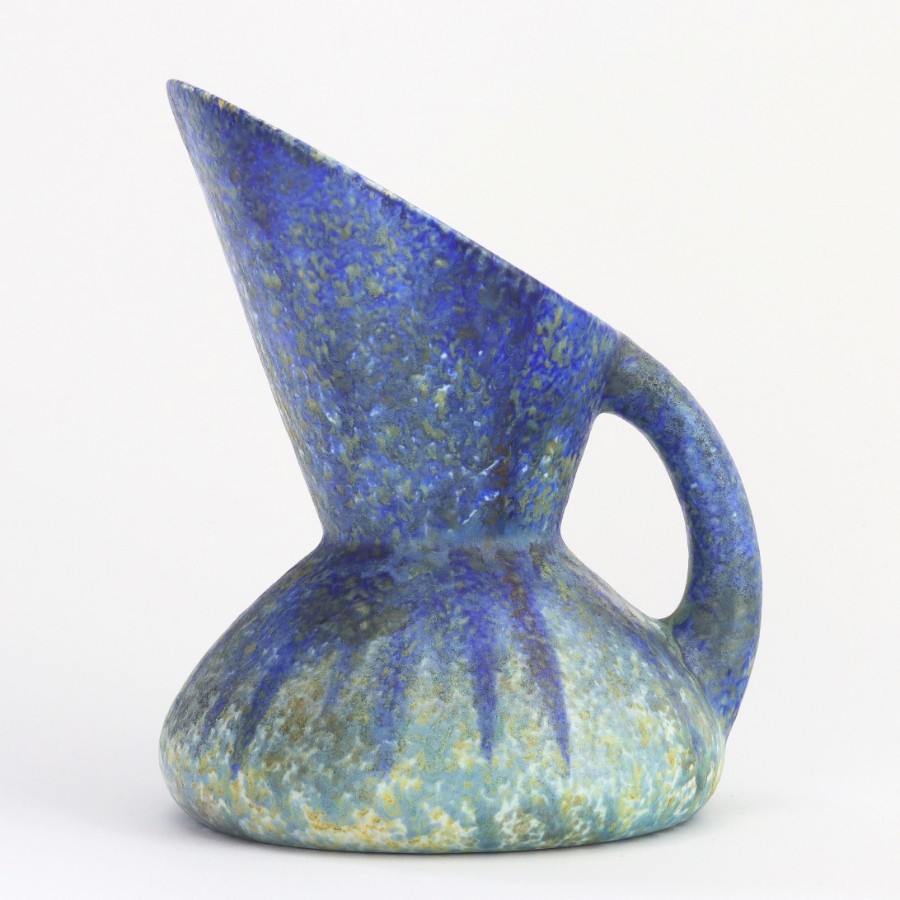 antiques available from other sellers in antique ceramics > other ceramics

Antique Ethos has 162 antiques for sale.
click here to see them all

Unusual Aesthetic style ceramic jug from Tooth & Co Ltd – trading as the Bretby Pottery c1910s. Design reminiscent of Dresser designs for the Linthorpe Pottery (which Henry Tooth left in 1882 to set up Bretby). The jug has a rounded conical body rising to a trumpet form neck and asymmetric rim. All over mottled blue glazes. Lightly struck, indistinct factory marks to base (with sun-burst mark just discernible). The jug measures 19cm to its highest point.
This jug is in excellent original condition with no cracks, chips, crazing or restoration. Please see images as these form an important part of the description.

Henry Tooth left Linthorpe in 1882 to set up Bretby Art Pottery in partnership with William Ault at Woodville, Derbyshire. William Ault left the partnership in 1887 to set up his own Ault pottery (1887 - 1922) at Swadlincote, Derbyshire. After the partnership break, Bretby pottery continued trading as "Tooth & Co" but retained the familiar sun-burst mark. When the Linthorpe Pottery closed in 1889, many of their pottery workers went to work at the Ault, Burmantofts and Bretby potteries, and these potteries purchased many of the moulds used by the Linthorpe pottery. With Christopher Dresser having previously acted as Art Director at Linthorpe and subsequently as a designer at Ault Pottery - much of what these potteries produced where either Dresser designs or were strongly influenced by his designs. By the start of WW1 demand for art pottery had been in decline (ceasing completely during the war) with production in much reduced numbers re-starting after WW1. Both Burmantofts and Ault ceased production of art pottery around this time however the Bretby pottery is documented as continuing to produce art pottery until after the end of World War II. However there is little information available about its type of production since the 1950's - except that it was primarily industrial pottery. The Pottery finally closed in the 1990s.

Antique Ethos has 162 antiques for sale.
click here to see them all