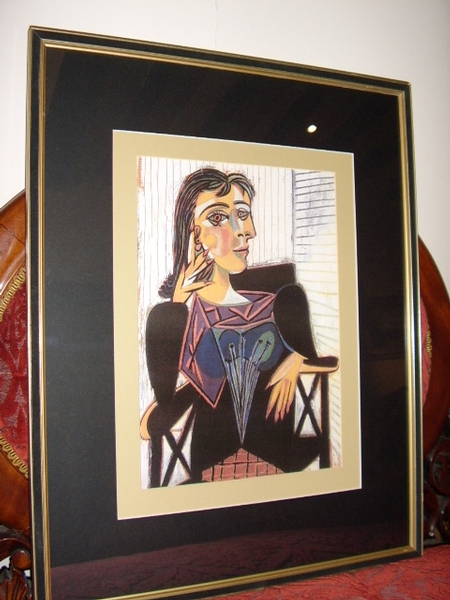 Pablo Picasso was born in Malaga, Spain on October 25, 1881.
By the age of 15 he was already technically skilled in drawing and painting.

Picasso's highly original style continuously evolved throughout his long career, expanding the definition of what art could be.In addition to painting, he would explore sculpture, ceramics and other art forms, and become one of the most influential artists of the 1900s.Picasso died on April 8, 1973 at his home, Notre-Dame-de-Vie in Mougin, France. He was buried on April 10 at his chateau Vauvenagues, 170 kilometers from Mougin.ABOUT DORA MAAR (Person in this early print)COPY & PASTE LINK BELOW INTO BROWSERhttp://www.sapergalleries.com/PicassoBloch299Detail.htmlDora Maar (November 22, 1907 – July 16, 1997) was a French photographer, poet and painter of Croatian descent, best known for being a lover and muse of Pablo Picasso.Before meeting Picasso, Maar was already famous as a photographer. She also painted. She met Picasso in January 1936 on the terrace of the Café les Deux Magots in Saint-Germain-des-Prés, Paris, when she was 29 years old and he 54. Picasso was attracted by her beauty and self-mutilation (she cut her fingers and the table playing "the knife game"; he got her bloody gloves and exhibited them on a shelf in his apartment). She spoke Spanish fluently, so Picasso was even more fascinated. Their relationship lasted nearly nine years.Maar became the rival of Picasso's blonde mistress, Marie-Thérèse Walter, who had a newborn daughter with Picasso, named Maya. Picasso often painted beautiful, sad Dora, who suffered because she was sterile, and called her his "private muse." She made herself better known in the art world with her photographs of the successive stages of the completion of Guernica, which Picasso painted in his workshop on the rue des Grands Augustins, and other photographic portraits of Picasso. Together, she and Picasso studied printing with Man Ray.Maar kept his paintings for herself until her death in 1997.
They were souvenirs of her extraordinary love affair, which made her famous forever. In Paris, still occupied by the Germans, Picasso left to her a drawing from 1915 as a goodbye gift in April 1944; it represents Max Jacob, his close friend who had just died in the transit camp of Drancy after his arrest by the Nazis.
He also left to her some still lifes and a house at Ménerbes in Provence.MEASUREMENTS:
Height: 27 Inches
Width: 21 InchesCONDITION:
Excellent condition in original frame and nicely mounted with replacement black card boarder under glass.TELEPHONE ENQUIRIES: 07765 856171
HOURS 10 AM - 10 PM 7 DAYS A WEEKDELIVERY UK MAINLAND & WORLDWIDE
QUOTES AVAILABLE ON REQUESTOUR REF: 0380