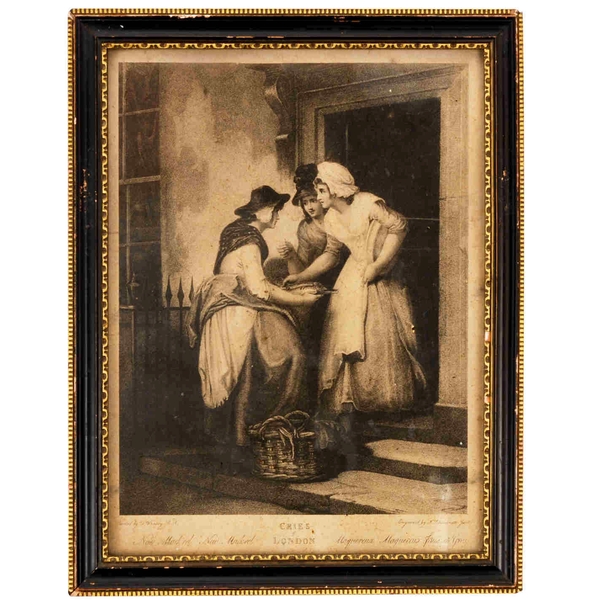 Rosy Vintage has 47 antiques for sale.
click here to see them all

From the series; "Cries of London" - painted by Francis Wheatley and engraved by Cardon Originally published between 1792 and 1796 the series “cries of London” places the working people of London (merchants) at the centre of the picture, and represents them as individuals of stature and presence. Each picture has a short explanation with it, printed at the bottom. The prints were originally sold at seven shillings and sixpence for a set, and the fact all thirteen were issued is itself a measure of their popularity This is a particularly good early example of “The Mackerel seller” in its original double gilded hogarth frame. The image depicts a mackerel seller on the doorstep of a house, with two women inspecting the fish that are being offered to them

Condition: Very good for its age; some damage to the frame and discolorationFree UK shipping.
More product info and international shipping rates at www.Rosy Vintage.com

www.Rosy Vintage.com Rosy Vintage is an online boutique for original vintage and antiques; an eclectic mix of one-off pieces, from period jewellery to interior accessories. Your purchase will be shipped to you in bespoke, best in class packaging. We ship worldwide using only industry leading global couriers. UK shipments are free of charge, please see our our website for international shipments. We put our customers first and are proud to offer a 'Love it, or return it' guarantee.

Other antiques available from rosy vintage

Rosy Vintage has 47 antiques for sale.
click here to see them all