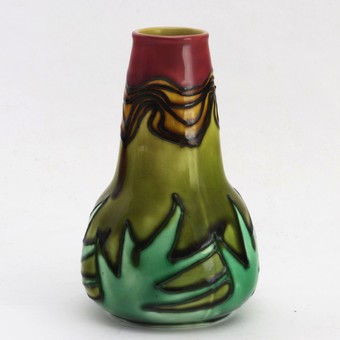 Antique Ethos has 157 antiques for sale.
click here to see them all

Beautifully coloured Mintons Secessionist art vase 1908. The vase has an ovoid body with tapering neck. Slip decorated abstract design in green, blue, amber and red. Designed by John Wadsworth. Base has Mintons Ltd printed mark and design number 42. Impressed Minton mark together with year cypher for 1908. The vase is 13 cm in height.
The vase is in excellent condition commensurate with age. No chips, cracks, crazing or restoration. Please see images as these form an important part of the description.

Antique Ethos has 157 antiques for sale.
click here to see them all