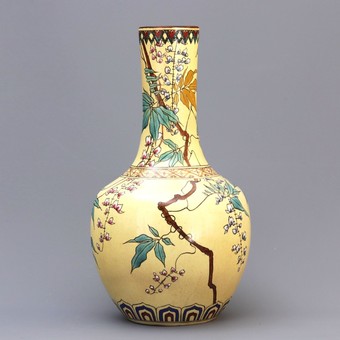 Uncommon Aesthetic Movement vase in the Japanese taste from Minton, dated 1872. Bottle shaped vase with golden-cream ground. Stylised trailing plant with weeping blossoms in raised over-glaze enamels. Geometric bands of decoration to base, collar and rim – showing all the characteristics of a Christopher Dresser design of that time. Impressed Minton marks (showing full set of three marks – year cypher for 1872, month letter O for October and potters mark). Painted artist’s mark ‘K’ together with “K.S to M.G Feb 7th 1873”. Dedication added when the vase had been originally decorated thus assuming that K.S was the artist ‘K’ (unknown). The vase is 26.5 cm in height.
This vase is in excellent original condition with no crazing, cracks, chips or restoration. Please see images as these form an important part of the description.

Dresser’s first designs for Minton pre-date the Paris Exhibition of 1867, but the exact date of this connection is not certain. Often regarded as the most important British designer of the later 19th century, at this time he was beginning what became a strong interest in ceramic design, leading him to work with several companies. His work with Minton continued for several decades, and although the Minton Archive has many designs certainly in his hand, other pieces in his style can only be attributed to him. Dresser had travelled to Japan, and in the 1870s produced a number of designs reflecting Japanese ceramics, catching the rising fashion for Japonism. He was also interested in what might be called the "Anglo-Oriental" style, evoking both Islamic and East Asian design, but without precisely following any.