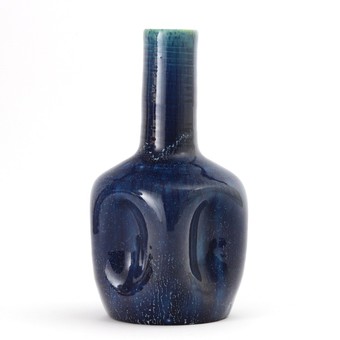 Gorgeously glazed Aesthetic Movement vase from the Linthorpe Pottery c1885. A known Christopher Dresser design. Bottle-shaped vase with concave sections to the body. Streaked glaze in tonal blues over a turquoise ground (the effect of which is not fully captured in images) with "curds" speckling the body. Clear impressed Linthorpe Pottery mark and design number 24. The vase measure 23 cm in height.
This vase is in overall excellent condition commensurate with age. No crazing, chips or cracks. Please see images as these form an important part of the description.