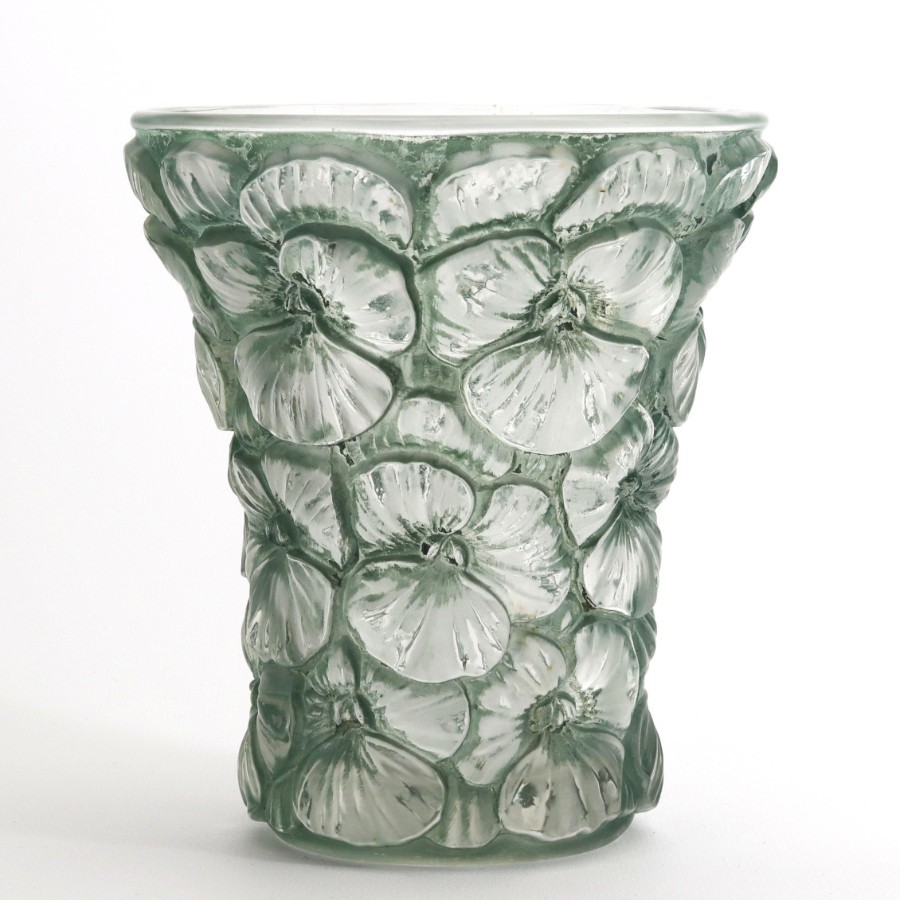 antiques available from other sellers in antique glassware > other glass

A beautiful Barolac glass vase by Josef Inwald c1930. Tapering body with flared rim. High relief moulded decoration of pansy flowers fully covering the body. Frosted ground with polished contrasting highlights to the petals. A rarer piece in having blue/green staining accentuating the very lovely design. Unmarked. Model no 603 (see catalogue image). The vase measures 14.5 cm in height.
The vase is in excellent condition commensurate with age and use with no chips or cracks. Please see images as these form an important part of the description.

The company dates back to 1893 when Josef Inwald leased an old glassworks (originally built 1876) in Pod?brady, Bohemia. Under Inwald the glassworks prospered. By the turn of the century he had bought the site and built new workshops. In 1902 the company gained Royal Warrant to the Austrian Emperor and, with continued success, the acquisition of additional works in Bohemia. The company moved to Prague in 1922 after the collapse of the Austro-Hungarian Empire. In 1927 Inwald began producing lead crystal which initially proved popular – however a sharp fall in demand and financial difficulties during the 1930s resulted in Inwald’s closure in 1939.
Dating Czech glass: Barolac glass was produced by Inwald during the 1920s/30s. Sometimes confused with French art glass of the same period since it was often unmarked. Some of the original moulds were put back into production after WWII but without the highly labour-intensive hand finishes applied in earlier years. A useful clues in identifying original pieces is the presence of mould seams. Pre-1939 Czech pressed glass was hand finished to remove mould seams which were blended into the design and are difficult to find. Raised portions of some designs were polished to create contrast with the frosted surfaces. Pre-1939 frosted Czech glass is of high quality with nearly flawless consistency – very rarely showing bubbles, gaps or pits. Acid etching is even over the entire piece. Most pieces are a soft grey in colour. Where etched areas meet non-etched surfaces, the borders are crisp.