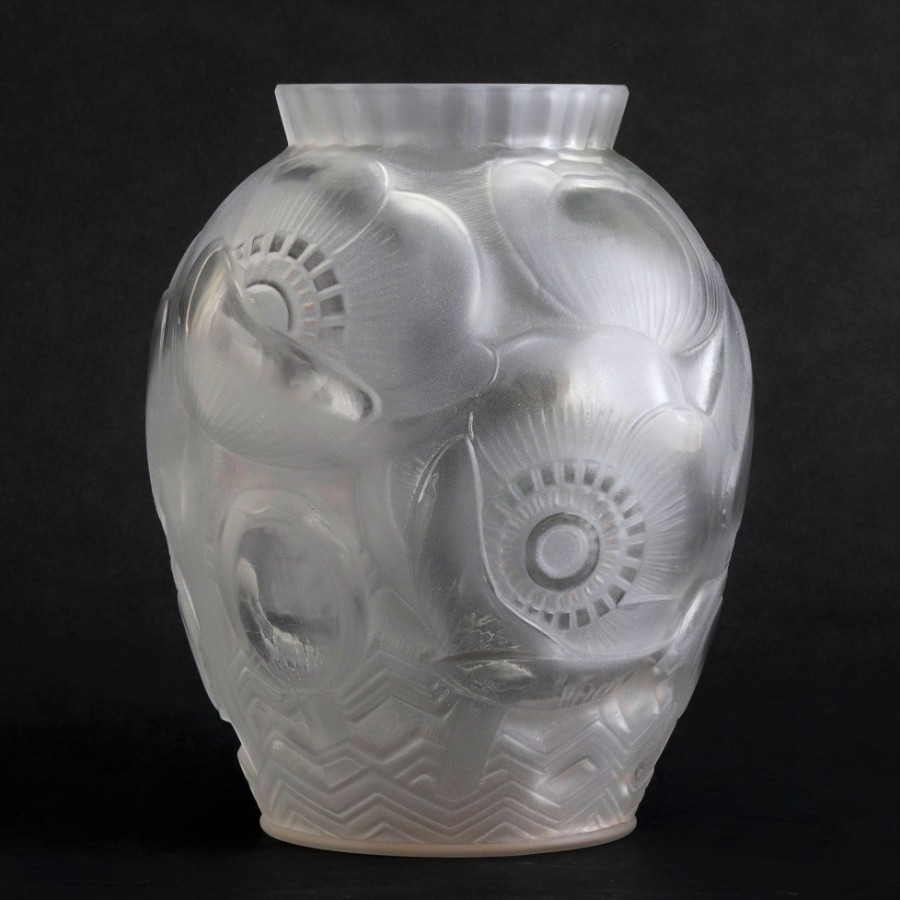 Eye-catching French Art Deco sculpted glass vase by Lalique designer Pierre D'Avesn c1930. Shouldered vase with fluted rim. Bold stylised design of poppies moulded around the body in deep relief. Frosted ground with polished relief highlights to compliment the very striking design. Moulded mark "D'Avesn France" to the base. The vase measures 21.5 cm in height.
This vase is in excellent condition commensurate with age. No chips, cracks or restoration. Please see images as these form an important part of the description.

In 1915 aged 14, Pierre D’Avesn went to work for Rene Lalique who was experimenting with mould blown glass. At this time moulded glass was seen as a sophisticated new technique allowing more complex and finer sculptural detail. D’Avesn worked for Lalique for around 11 years designing some of their best-known pieces – however Lalique did not allow designers to sign their own designs. After 11 years he moved to Daum to run a subsidiary company called ‘Verrier D'Art Lorrain’. D’Avesn had learnt one important lesson – he made a deal that his designs would have his name, not ‘Lorrain’ and usually they were of a far better quality than the company’s usual fare. 1937 saw D’Avesn working for Verlys, one of the better opalescent glass makers in France at the time – however alas, WWII intervened. After the War, D’Avesn went to work for Cristallerie Choisy-le-Roi who made mould blown opalescent glass for designers who wanted their own designs turned into glass sculptures, vases etc. In the 1930s they had made all the glass for companies like A. Hunebelle, Ferjac, Cesari and probably Etling – however with their corporate customers gone, by the end of the 1940s Cristallerie Choisy-le-Roi was owned by Sèvres. In addition to running a glassworks using existing moulds, D’Avesn continued designing pieces for Sèvres. After Lalique, D’Avesn had persuaded his employers to let him sign his work – thus difficult to tell which of his companies actually made a piece signed D’Avesn.