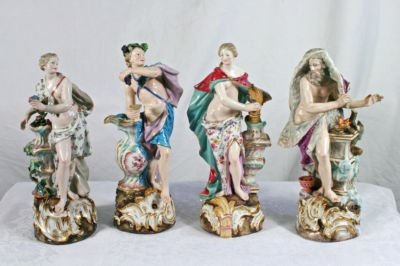 How often do you see a full set of four Meissen figures allegorical of the four seasons, let alone in such very good overall condition? Many versions of these figures were produced over the years; but these are the most powerful. Dating most likely date from 1840-1880, but possibly earlier, damage and restoration on this set is minimal. Winter, represented by a cloaked figure warming himself in front of a brazier, has a chipped finger, restored thumb and damaged toe on one foot. Summer, represented by a figure with a basket containing ears of corn, has some small restoration to a hand, some damage to whatever the hand is holding, slight restoration to the bottom of her cloak, and some damage to the ear of corn she appears to be holding in the other hand. Autumn, represented by a figure holding grapes and a goblet, has a restored toe and occasional chips to the garland around his head. Spring, represented by a figure with a basket of flowers, does not appear to be damaged or have any restoration. The figures measure around 9 inches in height; and all are marked with the Meissen crossed swords mark under the base (first quality), and incised model numbers 2724, 2730, 2731 and 2732. More pictures can be sent on request. Inspection is available on appointment in Surrey, U.K.

Based in Sydney and London we offer fine quality silver, porcelain and works of art sourced from the UK and internationally. Items may be viewed before purchase in Surrey, or for those buying on the internet we offer an unequivocal return policy if items are returned in the same condition within one week of receipt. We have sold and shipped thousands of valuable items internationally and will never compromise on either the quality of our goods or shipping services. Buy from or sell to us with complete confidence.

Other antiques available from fiona bates antiques and fine arts