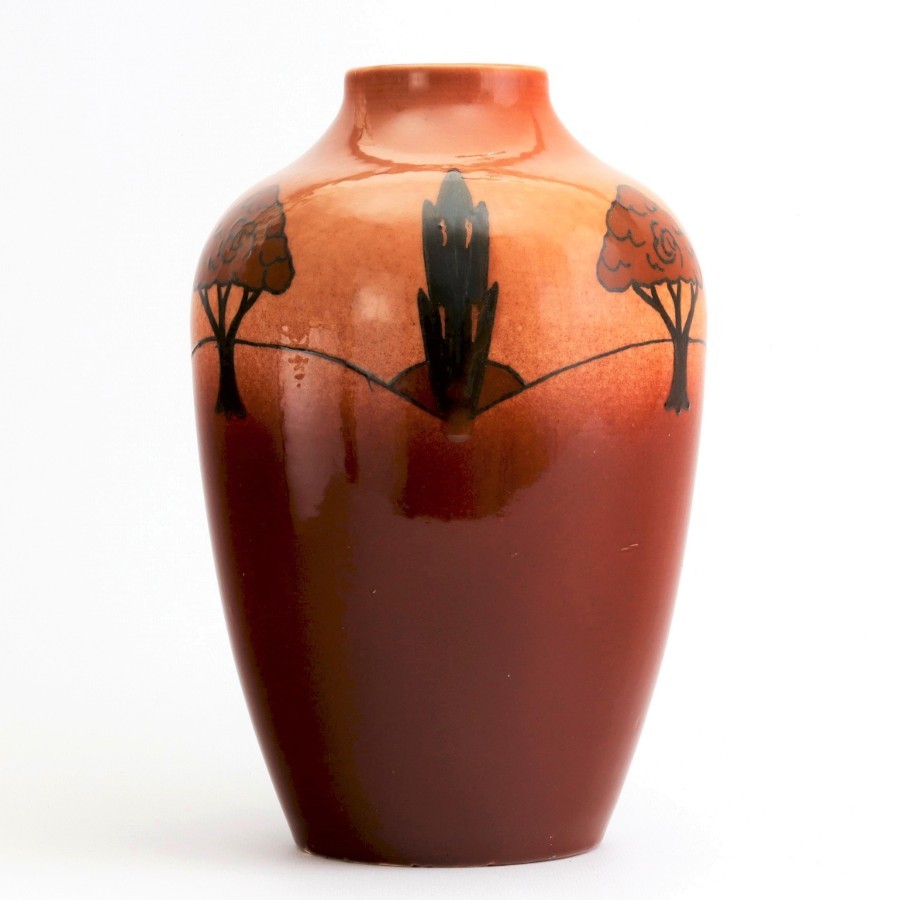 antiques available from other sellers in antique ceramics > ceramics

Antique Ethos has 150 antiques for sale.
click here to see them all

Unusual early 20th century Ault Pottery vase c1920. Shouldered vase with narrow tapered collar neck. Stylised tubelined and slip-decorated design of trees encircling the body. Attractively coloured ground graduating from amber at the rim to chestnut-brown at the base. Impressed AULT mark and ENGLAND (dating the vase to pre-1923 when the mark changed to "Aultcliff"). The vase measures 27 cm in height.
This vase is in excellent condition with no chips, cracks or restoration. Very minor surface crazing to the glaze. Small omission to the coloured glaze to the foot - not a chip! Please see images as these form an important part of the description.

William Ault (born 1842) started work at Henry Wileman's pottery in Longton as a packing boy but worked his way up to warehouse manager and then manager of their factory at Church Gresley. It was here that he met Henry Tooth and, when Tooth left the Linthorpe Pottery, they went into partnership – setting up the Bretby Pottery at Woodville. Ault left the partnership in 1887 to set up his own company at Swadlincote – trading as Ault Pottery and using the “AULT” mark. In 1890 the pottery bought many of the moulds from the closure of the Linthorpe pottery, which included many Dresser designs. Dresser himself designed for Ault between 1892 and 1900, although the pottery continued production of his designs after the contract ended. Ault also developed his own style of ornamental pottery with much of the artwork completed by his daughters (Clarissa and Gertrude) often based on Linthorpe designs. Like Tooth, he opened showrooms in London and exhibited at the international trade shows, winning many prizes for quality and originality. In 1922 when Ault retired, the company merged with the Ashby Potters' Guild becoming Ault and Tuncliffe. The mark was changed to "Aultcliff" from 1923 – however, the company ran into financial difficulties during the depression of the 1920s/30s and ceased production in 1937. The site continued trading as Ault Pottery Ltd under various ownerships until its final closure in 1975 – whilst returning the “AULT” mark into use, pieces produced during this time would also be marked “Made in England”.

Antique Ethos has 150 antiques for sale.
click here to see them all