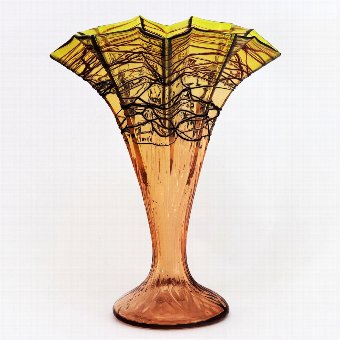 Antique Ethos has 151 antiques for sale.
click here to see them all

A very striking Art Nouveau Kralik art vase c1910. Pleated, fan-shaped, footed vase. Geometeric design in relief around its foot into its pleated body with applied glass thread in two colours. Deep amber colour merging to yellow at its rim. Known Kralik shape but in an unusual colour-way. The vase measures 27.5 cm in height. Unmarked as is typical of Kralik glass.
This vase is in excellent original condition with no chips, cracks or scratches. Please see images as these form an important part of the description.

Kralik Glassworks gets its name from Wilhelm Ritter von Kralik who inherited the glassworks in 1841 from his uncle (Jan Meyr) who was an award winning glassmaker in his own right. On Wilhelm’s death the company was divided between his sons. Karl Kralik retained the Meyr name, gaining recognition for its quality of design and production whilst Heinrich and Johann Kralik formed the company ‘Wilhelm Kralik Sohn’ – producing the glass we generally associate with Kralik. The two companies were united by Heinrich c1922 as ‘Wilhelm Kralik Sohne’ – continuing to produce glass in the Art Deco style. The company closed its doors forever during WWII yet has managed to preserve a legacy despite an almost complete lack of signed pieces. 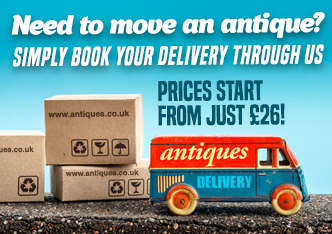 Antique Ethos has 151 antiques for sale.
click here to see them all