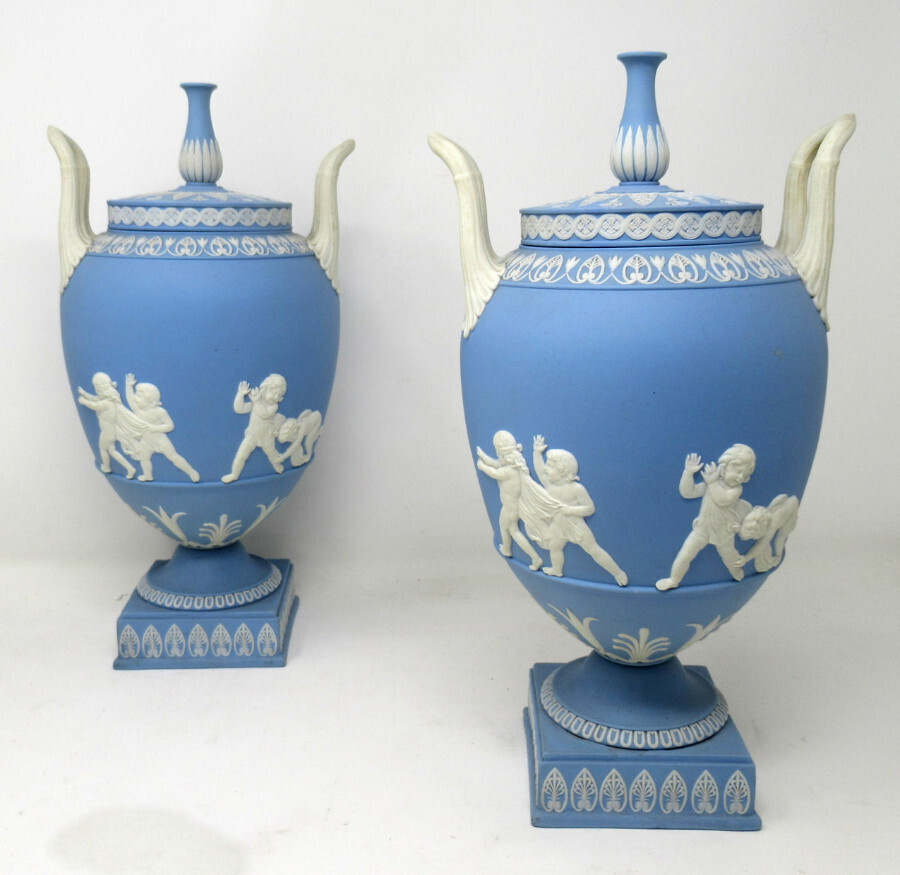 The twin elongated applied loop handles above white frolicking Cherubs in relief, each ending on a circular spreading socle on a square plinth base with Acanthus leaf decoration. Condition: In exceptional condition for such early pieces, very small imperfection to base of one, see final image WEDGWOOD mark on both at bases. Height: (entire, an impressive) 13.25” (33.5cm). Width: (across handles) 7” (18cm). Depth: (at base) 4” (10cm). Location: Dublin City, Ireland. Worldwide Store to door shipping. Affordable fixed price Store to door shipping. John Flaxman Junior was probably the most significant artist employed by Josiah Wedgwood during his lifetime. He had a significant impact on the factory's designs, many of which are today considered the finest examples of Josiah's output. An English artist, sculptor and designer born in York, Flaxman Jr was the son of a modeller and maker of plaster casts, also called John. The family moved to Covent Garden, London, in 1756. Ten years later, when only 11, Flaxman Jr - a sickly boy with congenital curvature of the spine - won a premium from the Society of Arts, later the Royal Society of Arts. Three years later he enrolled as one of the first students of the newly founded Royal Academy Schools. He exhibited at the Academy for the first time in 1770, and within a year had come to the attention of Josiah Wedgwood. John Flaxman Sr supplied Wedgwood with models for so-called wine and water ewers, occasionally described as Sacred to Bacchus and Sacred to Neptune, in 1775. The same year his son began to provide models and designs, ideally suited to the white reliefs Josiah used on his fine jasper pieces, to the Wedgwood factory. Most were first modelled in wax onto slate or glass grounds before being cast for production. Many subjects for these bas reliefs were taken directly from classically-inspired themes, inspired by Baron D'Hancarville's engravings of Sir William Hamilton's collection of vases which Wedgwood had in his library. They were used on ornamental wares such as vases, useful wares such as coffee or teapots, or on architectural plaques. In 1787 Flaxman went to Rome, partly sponsored by Wedgwood, to do modelling and supervise the Wedgwood school in Rome. He stayed seven years, but after producing only a couple of designs for Wedgwood he worked on his own projects, the most successful of which were the illustrations he produced for the works of Homer and Dante. These used a flat linear style, for which Flaxman became known and imitated; his experience of creating the bas reliefs for Wedgwood gave him a deep understanding of the effectiveness of such a style. When he returned to London, in 1794, Flaxman concentrated on monumental sculptures. It was fitting, however, that following his friend Josiah's death in 1795, he created the Wedgwood memorial in St Peter ad Vincula, Stoke-on-Trent's parish church.