Antique AN INDIAN BRONZE FIGURE OF A HORSE | ANTIQUES.CO.UK |

an indian bronze figure of a horse 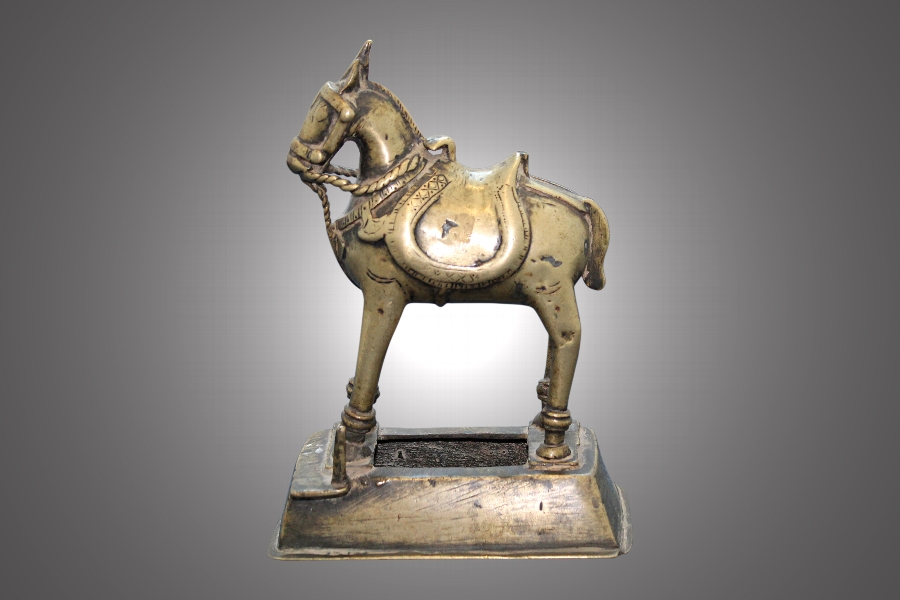 The Indian Art Centre has 8 antiques for sale.
click here to see them all

The horse is often identified as the Vahana (vehicle) of the deity Khandoba, regarded in Maharashtra as the guardian of the Deccan. Khandoba is the representation of Lord Shiva in the local Shaiva cult from Maharashtra. “His foremost wife is Parvati, but there in the uplands of the Deccan he is given a second wife who is considered to be a girl from one of the local pastoral communities. It has been suggested that tribal or itinerant populations would find Shiva as Khandoba more accessible because of his marriage to one of their own people. Consistent with distinct personality, seem in his own myth-cycle and ritual practices, Khandoba has his own iconography. He invariably rides a horse- suitable for the deity of a pastoral people- and is depicted with his consort tucked beside him.” T. Richard Blurton, Hindu Art, (England, 1992, reprinted 2007) p.93-94 The present horse, shown without consorts, presents some similarities in style and shape with the ones from Maharashtra and Karnatata.

The Indian Art Centre is a web based gallery that offers a wide range of Indian antiques from ivories and bronzes to furniture and miniature paintings. We have a keen interest in Anglo-Indian furniture and works of arts and Hindu iconography.

Other antiques available from the indian art centre

The Indian Art Centre has 8 antiques for sale.
click here to see them all