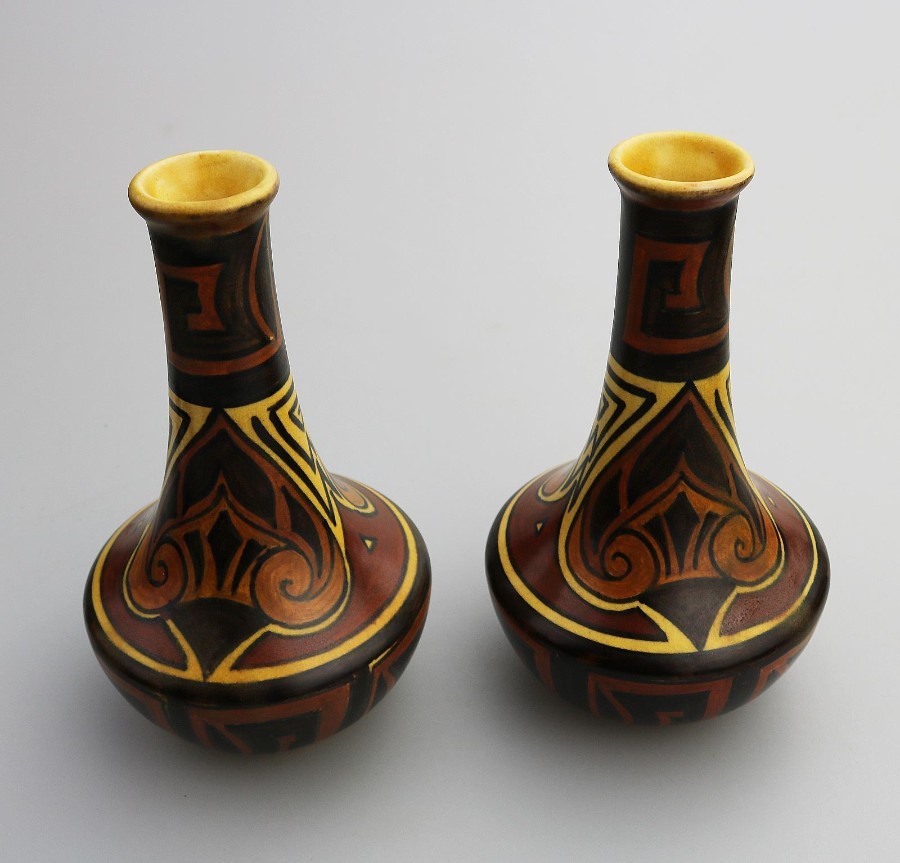 iCollectUK has 817 antiques for sale.
click here to see them all

Circa: 1920 - 1939Good Antique Condition - please view images6.5 inches (17cm) height approxPrice includes safe UK shipping - safe International shipping at costChameleon Ware: Hand-painted Chameleon Ware was introduced in the early 1920s and remained in production up to c.1939. It includes a wide range of ornamental wares in Egyptian and Persian-inspired shapes that reflected the popular interest in the archaeological discoveries of the 1920s. The shapes were hand-painted in bold, abstract patterns with a characteristic restrained palette of predominantly greens, browns and blues below a matt or lustre glaze. Stylised flame and leaf motifs are a component of many patterns reflecting an overall Art Nouveau influence. Chameleon Ware was exhibited at the Philadelphia Exhibition in 1926, winning a gold medal. Pattern numbers occur in the form xx/xxx. The two digit number refers to the pattern number (although no pattern books apparently survive) and the following three-digit code to the background colour (Calvert, 1998)Attractive animal figurines including, not surprisingly, a chameleon, and many other reptiles described as ‘rock garden ornaments’ were produced throughout the 1930s. These were decorated in the same colourful matt glazes used for the art ware. Life-like models of dogs were produced in the late-1930s. The factory’s art wares were distributed through a London agent and by agents in Australia, New Zealand and South Africa. Production of art pottery ceased with the onset of the Second World War and was never resumed. George Clews marks generally include the company name. On early marks, a banner spans the globe, whilst post-Second World War, the name only, in script, appears. Impressed ‘Chameleon Ware’ appears on early art ware, but was replaced by variously printed marks.Reference
Calvert, H. (1998). Chameleon Ware Art Pottery. Schiffer Publishing Ltd. Atglen, Pennsylvania, USA.
Pottery Gazette (1947). Volume 72, page 51.
Pottery Gazette (1948). Volume 73, page 905-06.
Pottery Gazette (1961). Volume 86, page 856.

iCollectUK has 817 antiques for sale.
click here to see them all