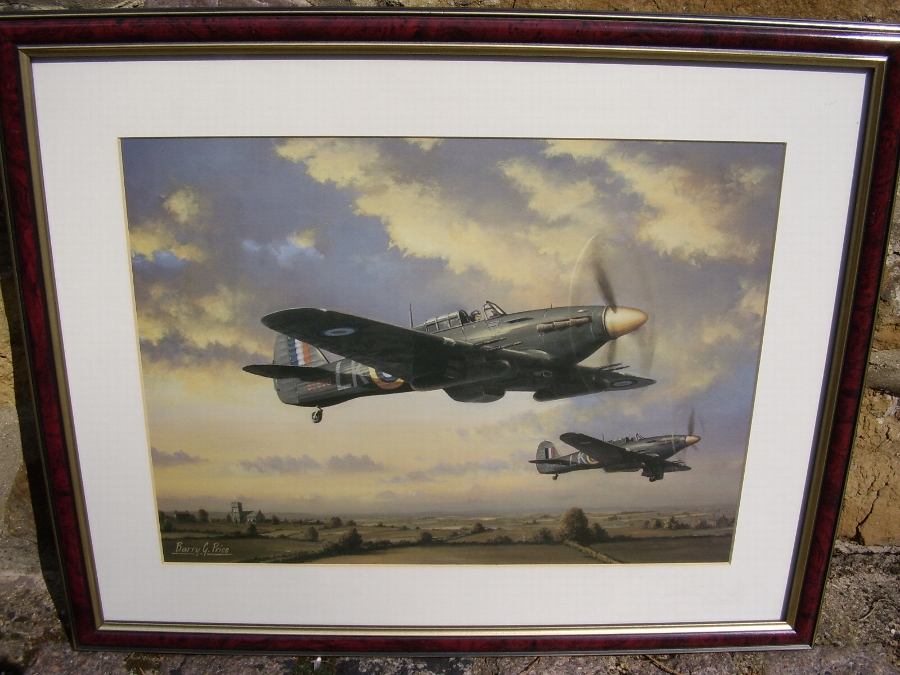 antiques available from other sellers in antique art > lithographs

ABOUT THE ARTISTMidlands born Barry Price developed a keen interest in drawing under the guidance of his grandfather well before leaving school. From the start it was the portrayal of trains, boats and planes that captured his imagination.After military servce in 1960, he continued his career in commercial art. Since the 1970's he has enjoyed good sales of original canvasses and undertakes special commissions. Many artworks have been reproduced as Greetings Cards, Calendars and Commemorative plates.AIRCRAFT / HURRICANE MK11C (Hurricane Mk IIA Series 2)Hurricane Mk IIA Series 1 equipped with new and slightly longer propeller spinner and fully replaced the machine-gun armament with four 20 mm (.79 in) Hispano Mk II cannons, two per side. Hurricane IIA Series 2 became the Mk IIC in June 1941, using a slightly modified wing. The new wings also included a hardpoint for a 500 lb (230 kg) or 250 lb (110 kg) bomb, and later in 1941, fuel tanks. By then performance was inferior to the latest German fighters, and the Hurricane changed to the ground-attack role, sometimes referred to as the Hurribomber. The mark also served as a night fighter and intruder.Hurricane Mark IIC, BE500 'LK-A' "United Provinces Cawnpore", being flown by Squadron Leader Dennis Smallwood, the Commanding Officer of No.87 Squadron RAF based at Charmy Down, Somerset. BE500 subsequently served with No. 533 Squadron RAF and finally in the Far East.Also depicted is Hawker Hurricane BN 377 LK night fighter.FRAME
A good quality frame with glass and clean beval cut card border.COLOURED PRINT
Bears copy of artist's signature lower left corner.TELEPHONE ENQUIRIES 07765 856171
HOURS 10AM - 10 PM 7 DAYS A WEEKDELIVERY UK MAINLAND & WORLDWIDE
QUOTES AVAILABLE ON REQUEST UK PACKAGE & POSTAGE ONLY £10 EXTRA OUR REF 0483