Antique VICTORIAN PRINT OF THE BAY OF NAPLES AFTER AN ORIGINAL WATERCOLOUR PAINTING BY ARTIST THOMAS LEESON ROWBOTHAM 1860 1 | ANTIQUES.CO.UK | 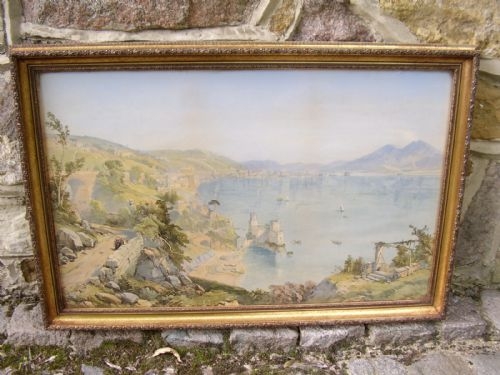 We are pleased to offer this delightful coloured print depicting the Bay of Naples with a distant view of Mount Vesuvius seen steaming in the mountainous background.

A typical neopolitan view of Victorian day to day life in this Italian fishing port,showing sailing vessels and a fishing punt anchored off the rocks.This rare coloured panoramic print has been cleverly produced after the original watercolour painting by the artist T L Rothbotham,being made to look realistically like a genuine watercolour, having the visual texture and wash seen on watercolour paper.ABOUT THE ARTISTROWBOTHAM, THOMAS CHARLES LEESON (1823–1875), landscape painter in watercolours, son of Thomas Leeson Rowbotham (1783–1853), professor of drawing at the Royal Naval School, New Cross, was born in Dublin on 21 May 1823. He was instructed in art by his father, a master of perspective, whose skill at the same time as a delineator of marine subjects inspired his son with his taste for river and coast scenery.

His first serious work in art was done in 1847 on a sketching tour in Wales, which was followed in succeeding years by visits to Scotland, Germany, and Normandy.
In 1848 he was elected an associate of the New Society (now the Royal Institute) of Painters in Water-colours, of which in 1851 he became a full member, and he contributed to its exhibitions no less than 464 works. He succeeded his father as professor of drawing at the Royal Naval School, collaborated with him in ‘The Art of Painting in Water-colours,’ and illustrated his book of ‘The Art of Sketching from Nature.’ He was a skilful artist, apt at catching the salient beauties of picturesque or romantic scenery, and fond of introducing figures, generally large enough to form a prominent part of the composition. He was not, however, a good painter of figures, and these in his later drawings were often the work of his eldest son, Charles. In his later years his love for sunny effects led him to restrict himself to Italian subjects, especially those of sea or lake, although he had never been in Italy.
He was also a good musician and chess-player. His health was never strong, and he died at Percy Lodge, Campden Hill, Kensington, on 30 June 1875, leaving a widow and eight children almost entirely unprovided for.
He was buried in Kensal Green cemetery. His remaining works were sold by auction by Messrs. Christie, Manson, & Woods on 21 April 1876, together with a number of sketches and drawings contributed by his professional friends to the fund raised for the benefit of his family. There are four drawings by him in the South Kensington Museum—‘Lake Scenery,’ ‘St. Godard, Rouen,’ ‘The Wrecked Boat,’ and ‘Rouen from the Heights of St. Catharine.’ Ruskin praised his work, and in 1858 said he had the making of a good landscape-painter, in spite of his ‘artificialness’.Rowbotham published in 1875 small volumes of ‘English Lake Scenery’ and ‘Picturesque Scottish Scenery,’ and a series of chromolithographic ‘Views of Wicklow and Killarney,’ with descriptive text by the Rev. W. J. Loftie. He also contributed illustrations to Cassell's ‘Picturesque Europe.’ He published many other chromolithographs; a series entitled ‘T. L. Rowbotham's Sketch Book’ was issued after his death.MEASUREMENTS ( iNCLDING fRAME )HEIGHT : 19.75 Inches
WIDTH : 29.5 InchesFRAME:Reframed around 1970-80,in quality decorative wood and gilt frames suitablely chosen for the period,being finished and protected under glass.TELPHONE ENQUIRIES: 07765 856171
HOURS 10AM - 10 PM 7 DAYS A WEEKDELIVERY UK MAINLAND & WORLDWIDE
QUOTES AVAILABLE ON REQUESTOUR REF : 0438