Antique VICTORIAN 19TH CENTURY MARINE OIL PAINTING ON ARTISTS BOARD AFTER WILLIAM BROOMES ORIGINAL OF THE RAMSGATE LIFEBOAT RESCUE OF THE VESSEL CALLED THE INDIAN CHIEF & PRESENTED IN THE ORIGINAL DECORATIVE FRAME WITH MONOGRAMMED INITIALS | ANTIQUES.CO.UK | 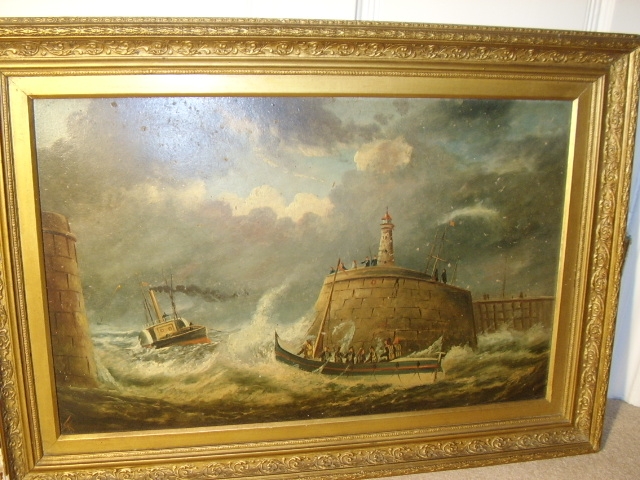 antiques available from other sellers in antique art > paintings

A well painted marine oil painting on artists board
depicting the RNLI Ramsgate lifeboat named "Bradford" being towed out beyond the Ramsgate harbour wall by a steam powered paddle driven tug vessel named as the "Vulcan" on the way to rescue a struggling vessel namely the famous Indian Chief,depicted in another painting being offered separately.

The lifeboat is painted in the distinctive RNLI colours for that time,being white hull,blue band and red stripe.The lifeboat has a huge airbox,one fore and one aft,which can be clearly seen and which were the secret of her self-right capabilities and extraordinary buoyancy.The members of the lifeboat crew are wearing the distinctive life jackets which consisted of cork strips,being the standard issue of the RLNI around the 1880's.The lighthouse can also be seen in the background which clearly identifies the location as the Ramsgate.The rescue was one of the most famously documented events which resulted in success and the lifeboats coxwain namely Charles Fish was awarded the institutions RNLI GOLD MEDAL.
The rest of the lifeboats crew and the Captain of the Tug called the Vulcan,were all awarded the silver medal.making this rescue one of the most highly decorated exploits in lifeboat rescue history.CONDITION
The painting has good colour with a few minute tiny speckled loses being difficult to see and not really that obvious or noticeable.FRAME
With some careful restoration to previous losses down the left hand margin and now looking alright.MEASUREMENTS
Height 25 Inches
Width 35 InchesDATE
Late Victorian (1881)SIGNATURE
The painting has been Monogrammed in the corner with the initials "LA",which requires further research to identify the artist.TELEPHONE ENQUIRIES 07765 856171
HOURS 10AM - 10PM 7 DAYS A WEEK BY APPOINTMENT ONLYDELIVERY UK MAINLAND & WORLDWIDE / QUOTES ON REQUEST* GOOD INTERIOR DECORATIVE ITEM.OUR REF: 0503A *(ONE OF A PAIR OFFERED SEPARATELY)