portrait of robert ashby 1774- , non commiss..officer of the london volunteers 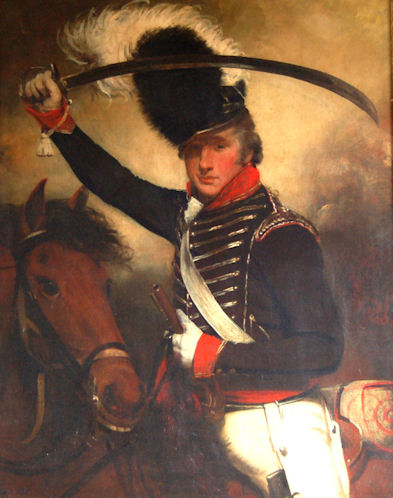 Harry Ashby was baptized in St Martin-in-the-Fields 26 April 1778, he was second son of Harry Ashby, an eminent engraver of bank notes to provincial , colonial and foreign bankers (see the DNB) , and his wife Sarah. He exhibited at the RA (69), BI (8) 1794-1836. He worked in london attracting mostly middle class and clerical clientele, but by 1810 had moved to Surrey, first lower Tooting, then Mitcham. He deid in Plymouth 13 june 1847 aged 69. His cause of death was listed as "disease of the spinal cord with paralysis of lower limbs and bladder, many years ". His son Harry Pollard Ashby was also an artist. (Literature Country life 18th April 1991.)

Harry senior worked for John Spilsbury (writing engraver and inventor of the jigsaw puzzle). Spilsbury died in 1769, and about 1772 Ashby married his widow, Sarah Spilsbury, nee May (1732-1802). Their sons Robert and Harry were born 1774 and 1778. Ashby took over the engraving business, disposing of the jigsaw section. By 1785 Ashby was in partnership with is son Robert apart from engraving maps (including London Bath and Isle of Man) Ashby''s main employment was engraving banknotes for the emerging banks at home and abroad. In this he showed unusual skill and ingenuity, and many of his bank notes and plates are now in the British Museum. He also engraved plates for Richard langford''s beauties of Penmanship 1785, John Hogkins Specimens of Greek Penmanship 1804, amongst many others . Harry Ashby traded as Harry Ashby 1774-1799: as Ashby and Son 1800-1807 and Ashby and Co 1808 until 1813 when he retired, when his sons took over The firm continued as Ashby and Co. until 1886.The portrait is painted by Harry Ashby and depicts his brother Robert Ashby who was a non commissioned officer of the London Volunteer Cavalry and Flying Artillery, he was one of many middle class /artisan types who filled the ranks of volunteer corps such as this. Robert was also a painter but concerned himself mainly with running the family engraving business with his father. A more substantial engraving featuring Robert as the main focus was published by the Ashby firm and dedicated to Sir Charles Price Bt , MP (1747-1818 ) to commemorate his term as Lord Mayor of London 1803 - 1804. Sir Charles Price was Colonel of the London Volunteer Cavalry and an eminent banker. The engraving features Robert Ashby mounted on his charger "Diamond", the horse was painted by John Nost Sartorius 1759-1828 for the original painting of the engraving. It is likely that Ashby brought in the more accomplished equestrian artist to paint the main horse and horses in the background for the larger painting. It is likely that the engraving which depicts military manouvers by the Volunteers was not only to commemorate Sir Charles Price''s new elevated position but to also serve as a patriotic "rally the troops" sort of scene, in the face of the impending French invasion threat.The engraving is inscribed as follows "Diamond a charger in the possession of Robert Ashby
painted by Sartorius
To Sir Charles Price. Bart. MP. Late Lord Mayor of the City of London
This portrait of a noncommissioned officer of the
London Volunteer Cavalry is by permission most respectfully dedicated
by his loyal and faithful servant Robert Ashby
engraved by George Clint published by Robert Ashby 29th feb 1804."
The sword is the 1796 Pattern Light Cavalry sabre so the picture would date between 1796-1812