portrait of a nobleman in van dyck dress by thomas bardwell 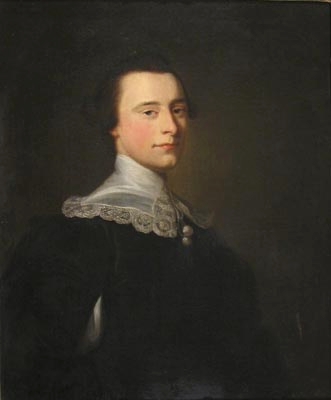 white painted rococo carton -pierre frame, There is a similar version in the Government Art collection, no 708
Thomas Hudson (1701 ? 1779) was an English portrait painter in the eighteenth century. He was born in 1701 in the West Country of the United Kingdom. His exact birthplace is unknown. Hudson studied under Jonathan Richardson in London and against his wishes, married Richardson''s daughter at some point before 1725. Hudson was most prolific between 1740 and 1760 and, from 1745 until 1755 was the most successful London portraitist. He lived at Deep Cross, Twickenham.Many assistants were employed by Hudson, to help with his paintings. Joshua Reynolds and Joseph Wright were students of Hudson. He retired toward the end of the 1750s.
Thomas Hudson died in 1779 in Twickenham. His extensive private art collection was sold off in three separate sales. Many portrait artists followed Van Dyck''s lead and painted their subjects in lavish clothing, the portrait sitters are often described as in Van Dyck dress, since it was an important fashion statement to be painted in this way.
A haberdasher''s son, Van Dyck was intensely interested in clothes. His English portraits of women often show a preference for informal dress: loose shifts, flowing drapery, open necks, bare bosoms and uncovered lower arms (so much quicker to paint than intricate lace collars and cuffs, and also more titillating - the bare arm, it has been said, was to the 1630s what the ankle was to the Victorians). This was what the poet Herrick meant by "a sweet disorder in the dress"; no one represented that liquefaction of the clothes better than Van Dyck. He loved exotic costumes, such as the "Persian" dress in which he painted Sir Robert and Lady Shirley, or the Indian pyjamas worn by the oriental traveller William Feilding, Earl of Denbigh. Many of his subjects wear fantasy costume, derived from the court masques of the 1630s. Van Dyck was the first "that e''re put ladies'' dress into a careless romance".
The mid-18th century witnessed the vogue of so-called "Vandyke" dress: loose shifts worn over chemises for women, with ribbons and rosettes; plain satin suits for men, with lace collars and cuffs. When Horace Walpole went to a masquerade in 1742, he saw "quantities of Vandykes, and all kinds of old pictures walked out of their frame". The drapery painter Joseph van Aken specialised in adding Van Dyck costumes to heads drawn by provincial artists. When the Dean of York got married in 1749, he and his bride were painted by Joseph Highmore wearing Van Dyck dress. Thomas Hudson was no different to this trend.
Nearly all the great 18th-century portraitists, from Pompeo Batoni and Allan Ramsay to Thomas Gainsborough and Joshua Reynolds, copied Van Dyck''s costumes, poses and compositions. Johan Zoffany''s group portrait of George III and his family was such a melange of Vandyckian motifs that Walpole thought it "ridiculous". The most famous of these imitations, Gainsborough''s Blue Boy, taken from Van Dyck''s George Villiers, 2nd Duke of Buckingham and Lord Francis Villiers, will not be on display at the Tate, but there are to be many other examples of Van Dyck''s continuing influence, particularly on "swagger" portraits, flaunting their subjects'' wealth, glamour and social superiority. The line runs though George IV''s court painter, Thomas Lawrence, to those two notorious recorders of the Edwardian establishment at its most plutocratic, the American John Singer Sargent and the Hungarian Philip de Laszl?. The latter''s Mrs George Sandys (1915) is blatantly indebted to Van Dyck''s Countess of Carlisle (1637). Sargent''s Earl of Dalhousie, painted in 1900, the year of the great Van Dyck exhibition at the Royal Academy, wears a tropical suit and necktie, but his intolerable hauteur instantly recalls that of Lord John and Lord Bernard Stuart, those two disdainful youths depicted by Van Dyck around 1638.