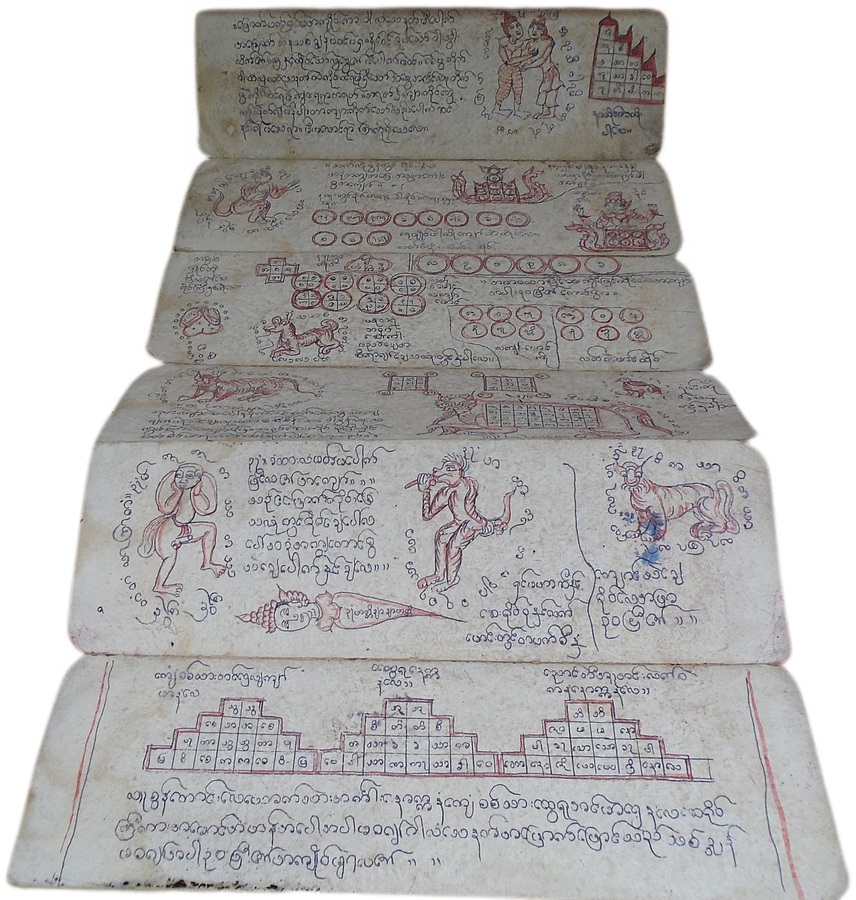 This folding book or parabaik has cabbalistic diagrams in red and black ink and images of charms for divination, tattooing and occult practices. Among the many figures included in the manuscript here are supernatural animals, deities, protective ogres, representations of Rahu who swallows the sun and moon to cause solar and lunar eclipses, magical tigers, etc. The script is likely to be Shan script.The parabaik records spells and other magic practices – a traditional belief system of the Shan or Tai, that ran parallel with their adherence to Theravada Buddhism.It has been produced on long strip of paper that folds out, concertina-style. The covers comprise paper thickened and hardened with black lacquer.
The paper is made from the inner bark of the local mulberry tree (Morus indica). The bark is cut in thin strips and dried in the sun. It is then boiled in a solution of water and wood ash to soften the fibres. The resulting pulp is then pounded to a smooth paste which is then poured over mesh screens and then left to dry in the sun. The resulting sheets of paper are then peeled off the mesh, trimmed and burnished and cut to the desired size.Drawing materials included black ink made from powdered soot mixed with animal or fish bile, and if available, Chinese black ink. There were no erasers so if a mistake was made, a white lime paste was applied to the surface – as appears to be the case in small areas on the manuscript here.Many such magical parabaik manuscripts have not survived either because they have simply deteriorated with age, or because they were burned as part of a ritual procedure.The book shows its age but is intact. The covers are missing. The drawings on each page important retrain their clarity and sharpness. If there is interest, I will provide other details/information available prior to purchase.Reference:
Conway, S., Tai Magic: Arts of the Supernatural in the Shan States and Lan Na, River Books, 2014.