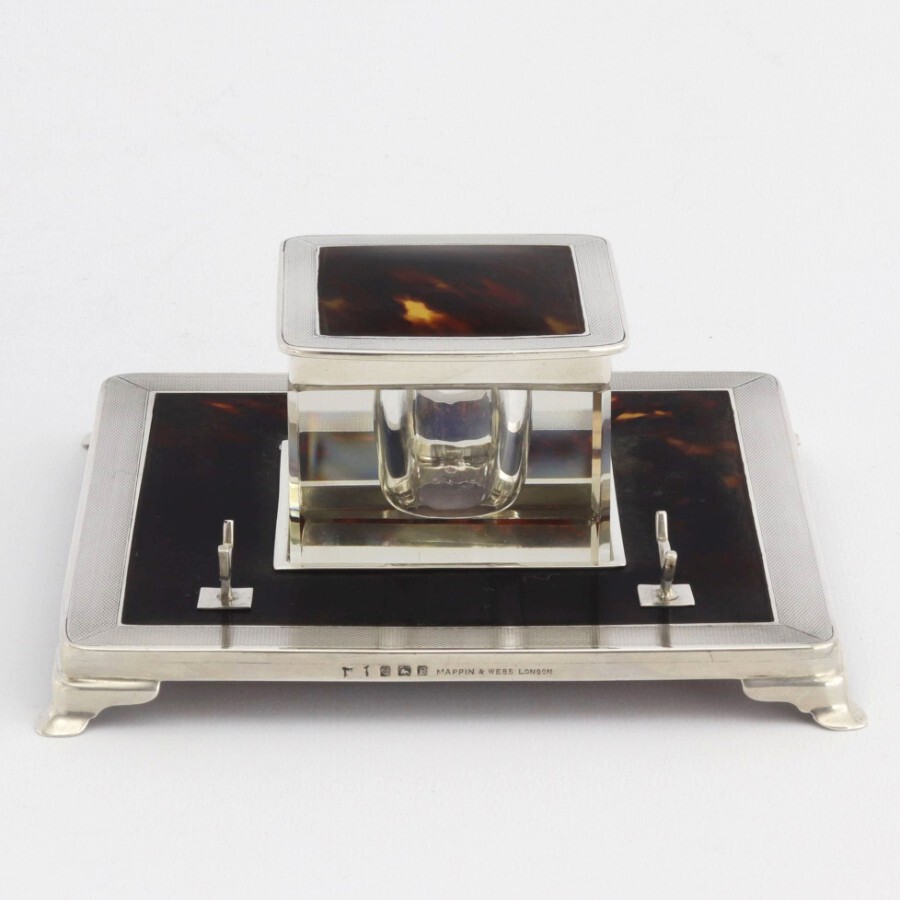 Striking and elegantly proportioned Art Deco inkwell and stand by Mappin & Webb, Birmingham 1929. Square glass inkwell with hinged silver and tortoiseshell cover inset into a square silver and tortoiseshell stand. Engine-turned silver frame to upper aspect of cover and stand. Stand with central silver well to hold the inkwell and has twin pen holders to the front. Raised on four ogee-shaped feet. Fully hallmarked for Mappin & Webb, Birmingham 1929 and marked “MAPPING & WEBB LONDON”. The stand measures 15.25 cm by 15.25 cm and overall height is 6.25 cm.
This inkwell with stand is in overall excellent condition commensurate with age and use. Inkwell sits snugly within its well. Hinge to cover is solid and sound. Exceptionally minor surface marks to silver. Tortoiseshell to cover and stand is sound. Please see images as these form an important part of the description.

Mappin & Webb traces its origins to 1775, when Jonathan Mappin opened a silversmiths in Sheffield which became Mappin Brothers. One of Jonathan Mappin's great grandsons, John Mappin, opened his own business in London, Mappin & Company, in 1860. His brother-in-law, George Webb joined in 1862 and the company became Mappin, Webb & Co. – acquiring Mappin Brothers in 1903. The first Mappin & Webb store opened in 1860 at 77-78 Oxford Street, London and the company’s candelabras, fine silverware and vanity products swiftly gained renown. As a natural progression from silverware, Mappin & Webb began designing jewellery – creating pieces for royalty both in the United Kingdom and internationally. The company historically held Royal Warrants to both the Russian Empire and the Japanese Royal Household and gained Royal Warrant in the UK in 1897. Today, Mappin & Webb holds warrants to both the Queen and the Prince of Wales. They also produced the original Ryder Cup trophy and made trophies for the Royal Ascot horse races for 75 years.