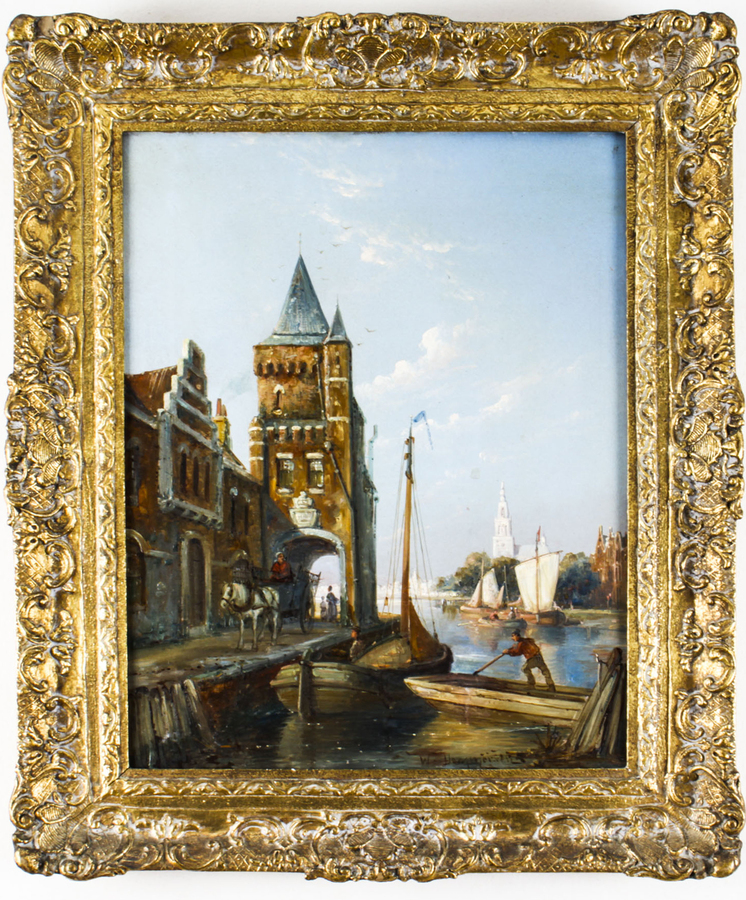 A beautiful waterscape painting " A view on the Amstel " byWilliam Raymond Dommersen (British, 1859-1927)Signed, and Signed with initials, and Inscribed on reverse, late 19th Century in date.

The painting has a captivating illuminating light with beautiful vibrant colours, it depicta a busy waterway with fishing and sailing boats in the foreground and the town of Amsterdam in the back ground.
William Raymond Dommersen was a painter of genre and landscapes in and around Scotland and Northern England. His works are widely exhibited throughout the European and North American continents and are on show at many galleries worldwide.William travelled quite extensively in Europe on painting expeditions with his fatherDommersen's paintings have been much admired over a period of time and it is evident that he is now firmly established in the history of architectural painting as is refelected in the auction prices at Christies:Nineth century European Art: 12 September 2007, London South Kensington, Lot 29 £4,750The Arthur Ackermann and Peter Johnson Collection:8 May 2008, London, South Kensington, Lot 42, £4,000Old Masters and 19th Century Art 9 November 2010, Amsterdam, Lot 110 £5,250Nineth century European Art: 28 April 2010, London South Kensington, Lot 221 £5,250
Condition:In really superb condition the painting andframe having been beautifully cleaned, please see photos for confirmation.
Dimensions in cm:Height 59 x Width 50 x Depth 7-FrameHeight 34 x Width 44 x Depth 7-CanvasDimensions in inches:Height 1 foot, 11 inches x Width 1 foot, 8 inches x Depth 3 inches-FrameHeight 1 foot, 1 inch x Width 1 foot, 5 inches x Depth 3 inches-Canvas
Our reference: A1813
William Raymond Dommersenwas born at the end of 1859 in Stratford, West Ham, London as the only son of the Anglo / Dutch fine art painter Pieter Cornelis Dommersen and Anna Petronella Synja. His parents had moved from the Netherlands in 1855 to London, England. His uncle, Cornelis Christiaan Dommersen, was also a painter in the Netherlands. It is possible that when his father received British nationality that they changed their family name – van Dommershuijsen – into the more English sounding surname Dommersen.Dommersen painted between 1875 and 1927 genre pieces, landscapes, marine scenes, village- and town-scenes of quality. His best known works are the European villages and towns along rivers and canals. He painted mostly in the Netherlands and England but visited also, often with his father and uncle, Belgium, France and Italy. His work such as view on the Canal Grande in Venice, river views in the Thames and Windsor Castle are well known. At some stage he lived in Royal Tunbridge Wells Kent, which was strategically placed for his travels to Europe. Whilst living in Royal Tunbridge Wells he painted The Pantiles there. Dommersen died in 1927 in London.