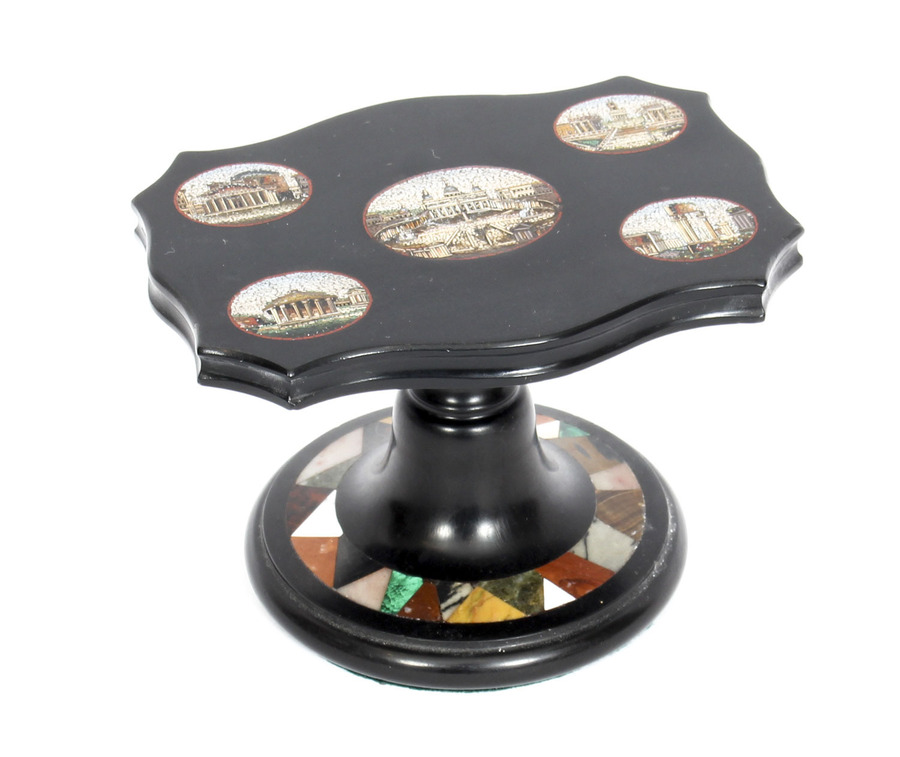 This is a superb decorative antique Italian Grand Tour Vatican Micro-Mosaic inset black marble desk weight, in the form of a miniature table, circa 1870 in date.

The cartouche shaped table top with a central depiction of Saint Peter's Basilica and Piazza, surrounded by views of the Pantheon, the Capitoline, the Temple of Vesta and the ruined Temple of Vespasian, all in oval reserves; raised on a knopped and waisted pedestal, the circular foot exquisitely inset with sample arrangement of semi precious stones including malachite, agate, onyx, cornelian, porphyry and pink granite.Not only is this desk paperweight very decorative, but it is also an exquisite mineralogical wonder that can be admired by all discerning collectors.
Condition:In excellent condition, please see photos for confirmation.Dimensions in cm:Height 10 x Width 14 x Depth 10Dimensions in inches:Height 4 inches x Width 5 inches x Depth 4 inches
Our reference: A1267
Micro-Mosaic
From the Renaissance micro-mosaics began to be made in Italy, reaching the height of their popularity in the mid 19th century, when Rome was the centre of production; there was a Vatican Mosaic Studio from 1576, set up to create mosaic replicas of the altarpieces in St Peter's Basilica, which were being damaged by the humid conditions of the vast and crowded interior. They were popular purchases by visitors on the Grand Tour, easily portable, and often taken home to set into an object there. Typical scenes were landscapes of Roman views, rarely of any artistic originality, and the micromosaics were small panels used to inset into furniture or onto snuffboxes and similar objects, or for jewellery.
A distinctive feature of micromosaics is that the tesserae are usually oblong rather than square.[7] The best work can achieve 3,000 to 5,000 tesserae per square inch. The best collections are in the Hermitage Museum and the Gilbert Collection in London.
The Grand Tour was the traditional trip of Europe undertaken by mainly upper-class European young men of means. The custom flourished from about 1660 until the advent of large-scale rail transit in the 1840s, and was associated with a standard itinerary.It served as an educational rite of passage. Though primarily associated with the British nobility and wealthy landed gentry, similar trips were made by wealthy young men of Protestant Northern European nations on the Continent, and from the second half of the 18th century some South American, U.S., and other overseas youth joined in. The tradition was extended to include more of the middle class after rail and steamship travel made the journey less of a burden.The primary value of the Grand Tour, it was believed, lay in the exposure both to the cultural legacy ofclassical antiquityand theRenaissance, and to the aristocratic and fashionably polite society of theEuropeancontinent. In addition, it provided the only opportunity to view specific works of art, and possibly the only chance to hear certain music. A grand tour could last from several months to several years. It was commonly undertaken in the company of a knowledgeableguideortutor.The Grand Tour not only provided aliberal educationbut allowed those who could afford it the opportunity to buy things otherwise unavailable at home, and it thus increased participants' prestige and standing. Grand Tourists would return with crates of art, books, pictures, sculpture, and items of culture, which would be displayed in libraries,cabinets, gardens, anddrawing rooms, as well as the galleries built purposely for their display; The Grand Tour became a symbol of wealth and freedom.