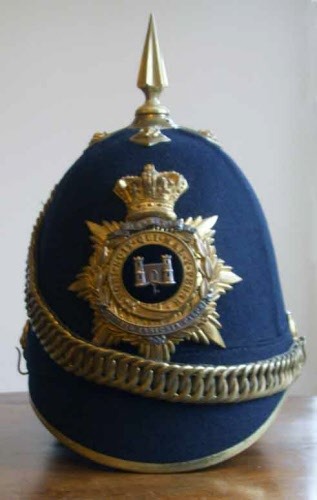 Percussion Cap has 244 antiques for sale.
click here to see them all

12th Regiment [East Suffolk] Officer's Blue Cloth Helmet and tin - named Major O Shaughnessy
An 1878-1881 pattern blue cloth home service helmet to the 12th [Suffolk] Regiment of dark blue cloth complete with gilt metal cross piece, spike and rose pattern ear bosses that support a gilt chin chain. It also has a gilt metal spine running down the rear of the helmet and a gilt metal trim around the front peak with the remaining helmet edge trimmed with a narrow band of patent leather. The interior has a leather sweatband and silk liner. To the front of the helmet is a gilt eight pointed star plate, the topmost point displaced by a Victorian crown. Mounted on the star is a gilt laurel wreath. Within the laurel wreath is the garter in gilt metal and within that is the regimental device of a castle and key in silver coloured metal on a velvet background. Above this is a scroll "Gibraltar" and below another scroll "Montis Insignia Calpe" This helmet is the extremely rare, early rounded-peak, first pattern type with this plate only worn between 1878-1881. The helmet is in a cased tin with brass name plate "Major O Shaughnessy". [Copies of some Army Lists with details of Major O Shaughnessy are included. He was promoted to Major on 3-4-1878]. Overall, in excellent condition for its age and would make a first-class display item.

Percussion Cap has 244 antiques for sale.
click here to see them all