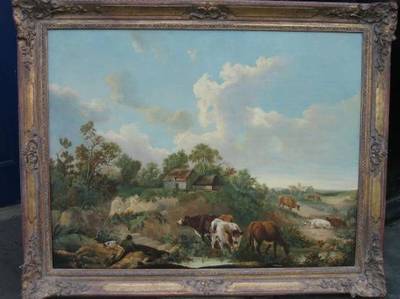 James Leakey was a native of Exeter who developed a good practice as a painter of portraits and minatures (his picture of the engraver Samuel Cousins is in the National Portrait Gallery and a number of works are in the museum in Exeter), but had a preference for landscapes. In this he was praised and encouraged by the great diarist and painter Joseph Farington, who noted Leakey had a large family to support and could only do this by portraiture. Nevertheless, Leakey exhibited several landscapes at the Royal Academy (including one entitled ‘Landscape, cattle and figures’ in 1822), which were described as, “clearly and accurately depicted in bright colours.”Among the pictures in the museum at Exeter are five landscapes, several of which feature subjects similar to this, and these must be considered his favourite views. This is a fine English pastoral view, showing influences back to Morland, and in itself a prototype for the type of painting popular throughout the Victorian period.