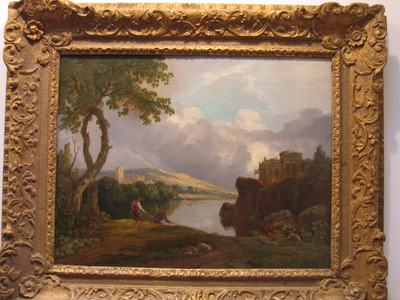 This is a most interesting picture, in that it combines elements from several of Wilson's pictures and the impasto and broad, confident strokes indicate an artist very much in control, rather than creating a laborious copy, and the foreground and foliage are so good they could have been made by the master himself. Broadly based on the 1770 picture, Apollo and the Seasons (Fitzwilliam, Cambridge), the composition also draws elements from the famous Lake Avernus series, whilst the ruined temple sits on a rock repeated in the River Arno picture in the collection of the Earl of Crawford. The slightly off-centre grouping of figures appear in numerous Wilsons. These pictures and working sketches would have been in the studio and available for students to study.For a landscape painter, Wilson had an unusually large studio and taught about seventeen apprentices including the great diarist Joseph Farrington, William Hodges (who gained fame as Cook's draughtsman on his second voyage), Thomas Jones, who later went to Italy and produced some very important pictures, the Irish landscape painter Robert Crone and John Boultbee, subsequently a horse painter of note.
This picture formed part of a large collection of over twenty Wilsons which was formed in the early part of last century and sold by Christie's in 1965 and 66. At that time this work was considered to be by Wilson.