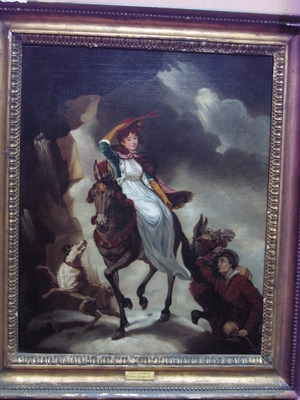 This is a version of the picture (8 feet x 6 feet) painted for Sir John Leicester of his mistress Miss St. Clair and exhibited to much acclaim at the RA in 1802 . It is most likely that Northcote painted this picture for William Ward to produce his engraving of the subject in 1804. The subject was a well known model of the time and was born Ann Vorrells. She was painted three times by Hoppner, at least five times by Northcote (as the Alpine Traveller, the Fair Falconer and as Miranda in Prospero & Caliban) She also sat for William Owen, Domenico Pellegrini (The Opera Box) and William Hamilton.The prime version of this picture was almost certainly commissioned to commemorate a previous trip to Italy by Sir John and demonstrates the difficulty travellers had crossing the Alps. Northcote had first hand experience of this, having been in Italy between 1777 and 1781. After his marriage in 1810, Leicester gave this picture away and it ended up in the Royal Hibernian Institute in Dublin, where it was destroyed in a fire in 1816. James Northcote was born in Plymouth and became a pupil of Sir Joshua Reynolds and also enrolled at the RA Schools in 1771. Leaving Reynolds’ studio in 1775, he painted portraits for two years in Plymouth before going to Italy. Whilst in Rome the Uffizi Collection asked him to donate a self portrait. Back in London, Northcote painted portraits, history pictures and genre. He painted extensively for Boydell’s Shakespeare Gallery and a large number of pictures were engraved. Northcote exhibited an amazing 229 works at the RA (elected an Acadamician in 1787) and 37 at other galleries.