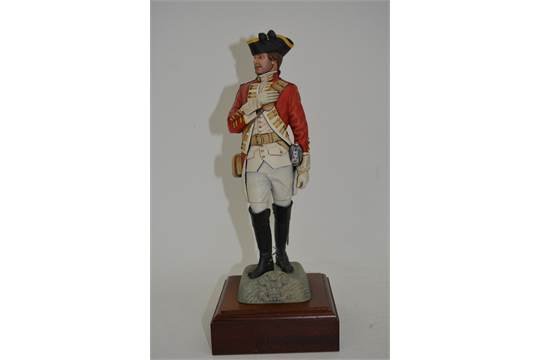 A finely detailed model depicting an officer of the British Cavalry atop a rock with applied Prince of Wales Feathers badge.

we can export to all countriesHEIGHT=33CMfor quote on postage/carriage outside of the uk please advise your country!historyThe 3rd (Prince of Wales's) Dragoon Guards was a cavalry regiment in the British Army, first raised in 1685 as the Earl of Plymouth's Regiment of Horse. It was renamed as the 3rd Regiment of Dragoon Guards in 1751 and the 3rd (Prince of Wales's) Dragoon Guards in 1765. It saw service for two centuries, including the First World War, before being amalgamated into the 3rd/6th Dragoon Guards in 1922.
The regiment was first raised by Thomas Hickman-Windsor, 1st Earl of Plymouth as the Earl of Plymouth's Regiment of Horse in 1685 as part of the response to the Monmouth Rebellion, by the regimenting of various independent troops, and was ranked as the 4th Regiment of Horse.[1] The regiment saw action at the Battle of Schellenberg in July 1704, the Battle of Blenheim in August 1704, the Battle of Ramillies in May 1706, the Battle of Oudenarde in July 1708 and the Battle of Malplaquet in September 1709 during the War of the Spanish Succession.[2] In 1746 it was ranked as the 3rd Dragoon Guards, and formally titled in 1751 as the 3rd Regiment of Dragoon Guards.[1]Shortly thereafter, in 1765, it took the title 3rd (Prince of Wales's) Dragoon Guards, for the future George IV.[1] It took part in the suppression of the Bristol riots in 1831 and, after service in India, took part in the British Expedition to Abyssinia in 1868.[2] The regiment was employed chasing the elusive General Christiaan de Wet in spring 1901 during the Second Boer War.[3]

About me I have collected glass and ceramics, antiques and antiquities for many years, and my shop philosophy is to sell very good antiques at very low prices very quickly so I do not need to carry much stock; larger shops will charge much more, but take much longer than I do to make a sale. Each to their own, then - but that makes my prices ultra-low compared to a bricks-and-mortar antiques shop. I try to describe everything I sell as honestly as possible, including any damage, issues, or attributions to a maker, in my descriptions. If you have any questions, a problem with a piece you’ve bought, or even further info on a piece I’m selling (always welcome!) please mail me. Please don’t ever leave negative or neutral feedback without speaking to me – we can always come to a solution Remember if you are looking for something special and cannot find in my shop,please ask me and i will source it for you.