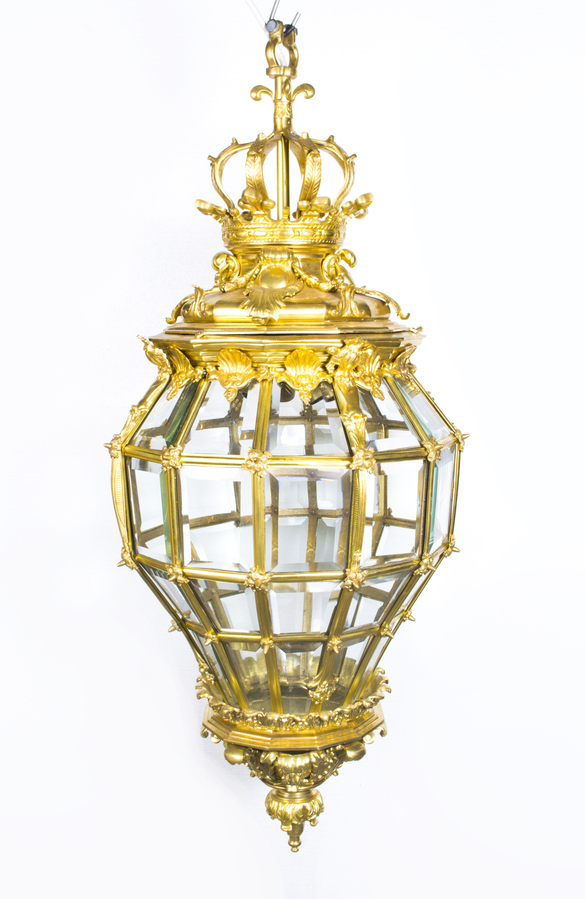 An exceptional and impressive large brass three light hall lantern after the model made for the Palace of Versailles.

This superb decorative lantern is finely cast and chiseled in solid bronze with a pierced crown above a diamond baluster body with bevelled glass panes divided by classical figures and foliage, the lower section has fine lion's head mounts with a finial on the end. The lantern is modelled after the celebrated Versailles model.This high quality hot cast solid bronze lantern was produced using the traditional "lost wax" process, otherwise known as the"cireperdue"method.
There is no mistaking its superb quality and very grand scale and design, which is certain to make it a talking point in your home and stand proud in whichever room you choose to light up.Condition:In excellent ready to use condition.Dimensions in cm:Height 122 x Width 56 x Depth 56Dimensions in inches:Height 4 foot x Width 1 foot, 10 inches x Depth 1 foot, 10 inches
Our reference: 07079
Declared the official royal residence in 1682 and the official residence of the court of France on May 6, 1682, the Palace of Versailles was abandoned after the death ofLouis XIVin 1715. In 1722, however, it was returned to its status as royal residence. Further additions were made during the reigns ofLouis XV(1715–74) andLouis XVI(1774–92).Following theFrench Revolutionof 1789, the complex was nearly destroyed; it was subsequently restored byLouis-Philippe(1830–48), but its utility gradually decreased. By the 20th century, though it was occasionally used for plenary congresses of the French parliament or as housing for visiting heads of state, the primary utility of the palace lay in tourism.