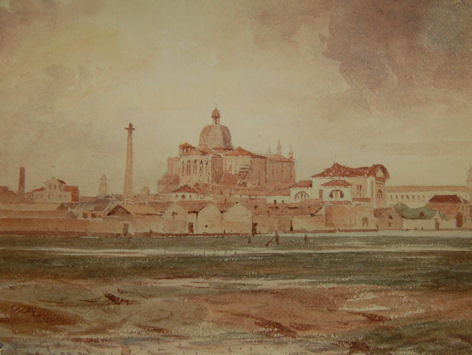 The Basilica di San Giovanni e Paolo, known in the Venetian dialect as San Zanipolo, is a church in Venice, northern Italy. One of the largest churches in the city, it has the status of a minor basilica. After the 15th century the funeral services of all of Venice''s doges were held here, and twenty-five doges are buried in the church. A huge brick edifice built in the Italian Gothic style, it is the principal Dominican church of Venice, and as such was built for preaching to large congregations. It is dedicated to John and Paul, not the Biblical Apostles of the same names, but two obscure martyrs of the Early Christian church in Rome, whose names were recorded in the 3rd century but whose legend is of a later date.
In 1246, Doge Jacopo Tiepolo donated some swampland to the Dominicans after dreaming of a flock of white doves flying over it. The first church was demolished in 1333, when the current church was begun. It was not completed until 1430.The vast interior contains many funerary monuments and paintings, as well as the Madonna della Pace, a miraculous Byzantine statue situated in its own chapel in the south aisle, and a foot of St Catherine of Siena, the church''s chief relic.San Giovanni e Paolo is a parish church of the Vicariate of San Marco-Castello. Other churches of the parish are San Lazzaro dei Mendicanti, the Ospedaletto and the Beata Vergine Addolorata.

Notable artists reprsented in the Basilica : Giovanni Bellini (SS Vincent Ferrer, Christopher and Sebastian in the south aisle)
Bartolomeo Bon (the great west doorway)
Cima da Conegliano or Giovanni Martini da Udine (Coronation of the Virgin in the south transept)
Piero di Niccol? Lamberti and Giovanni di Martino (tomb of Doge Tommaso Mocenigo in the north aisle)
Gregorio Lazzarini (sala S. Tommaso)
Pietro Lombardo (tombs of Doge Pietro Mocenigo on the west wall and Doges Pasquale Malipiero and Nicolo Marcello in the north aisle; tomb of Alvise Diedo in the south aisle)
Tullio Lombardo ( and Alessandro Leopardo?) (tomb of Doge Andrea Vendramin on the north wall of the choir)
Lorenzo Lotto (St Antonine in the south transept)
Rocco Marconi (Christ between SS Peter and Andrew in the south transept)
Giovanni Battista Piazzetta (St Dominic in Glory on the ceiling of the Capella di San Domenico)
Veronese (The Assumption, The Annunciation and The Adoration of the Magi on the ceiling of the Capella del Rosario; The Adoration of the Shepherds in the Capella del Rosario). The famous The Feast in the House of Levi, painted for the refectory, is now in the Accademia Gallery.
Alessandro Vittoria (St Jerome in the north aisle)
Alvise Vivarini (Christ carrying the Cross in the sacristy)
Bartolomeo Vivarini (Three Saints in the north aisle)The Capella del Rosario (Chapel of the Rosary), built in 1582 to commemorate the victory of Lepanto, contained paintings by Tintoretto, Palma the Younger, Titian and Giovanni Bellini, among others, but they were destroyed in a fire in 1867 attributed to anti-Catholic arsonists.
Venice is a city in northern Italy known both for tourism and for industry, and is the capital of the region Veneto, with a population of the whole Comune of about 270,660 (census estimate 30 April 2009). Together with Padua and Treviso, the city is included in the Padua-Treviso-Venice Metropolitan Area (PATREVE) (population 1,600,000).The name is derived from the ancient people of Veneti that inhabited the region as of 10th century B.C.The city historically was the capital of the Venetian Republic. Venice has been known as the "La Dominante", "Serenissima", "Queen of the Adriatic", "City of Water", "City of Masks", "City of Bridges", "The Floating City", and "City of Canals". Luigi Barzini, writing in The New York Times, described it as "undoubtedly the most beautiful city built by man". Venice has also been described by the Times Online as being one of Europe''s most romantic cities.The city stretches across 117 small islands in the marshy Venetian Lagoon along the Adriatic Sea in northeast Italy. The saltwater lagoon stretches along the shoreline between the mouths of the Po (south) and the Piave (north) Rivers. The population estimate of 272,000 inhabitants includes the population of the whole Comune of Venezia; around 60,000 in the historic city of Venice (Centro storico); 176,000 in Terraferma (the Mainland), mostly in the large frazioni of Mestre and Marghera; and 31,000 live on other islands in the lagoon.The Republic of Venice was a major maritime power during the Middle Ages and Renaissance, and a staging area for the Crusades and the Battle of Lepanto, as well as a very important center of commerce (especially silk, grain and spice trade) and art in the 13th century up to the end of the 17th century. This made Venice a wealthy city throughout most of its history.[6] It is also known for its several important artistic movements, especially the Renaissance period. Venice has played an important role in the history of symphonic and operatic music, and it is the birthplace of Antonio Vivaldi.John Louis Petit was born at Ashton-under-Lyne, Lancashire, son of John Hayes Petit. He was educated at Eton, and contributed to the "Etonian". He was elected to a scholarship at Trinity College Cambridge in 1822, graduated BA in 1823 and MA in 1826, and on 21st June 1850 he was admitted "ad eundem" at Oxford. He took holy orders in 1824, but undertook no parochial work. Petit showed a taste for sketching in early years. His favourite subject was old churches, and a great part of his life was spent in visiting and sketching them. In 1839 he made his first extensive tour of the continent. The results appeared in his "Remarks on Church Architectire" (1841, 2 vols which had illustratuions. It was followed in 1846 by "Remarks on Church Architectural Character" Royal folio format.In the same year Petit published a lecture which he had delivered on 24th Feb 1846 to the Oxford Society for promoting the study of Gothic Architecture, under the title "Remarks on the Principles of Gothic Architecture as applied to ordinary Parish Churches". It was succeeded by "Architectire of Tewksbury Abbey Church". Royal svo 1846. " Architectural notes in the neighbourhood of Cheltenham"and "Remarks on Wimborne Minster", 1847. "Remarks on Southwell Minster". With numerous good illustrations. 1848. "Architectural Notices relating to Churches in Gloucestershire and Susse". 1849. "Architectural Notices of the Curious Church of Gillingham.Norfolk". And an "Account of Sherborne Minster". 1850. In 1852 Petit published an account of Brinkburn Priory". In 1854 appeared Petit''s principal work. "Architectural Studies in France", imperial SVO. It was beautifully illustrated with fine woodcuts and facsimiles of anastic drawings by the author and his companion, Professor Delamotte. It showed much learningand observation, and threw light upon the formation of Gothic in France, and on the differences between English and French Gothic. A new edition , revised by Edward Bell, FSA, with introduction, notes and index, appeared in 1890. The text remained unaltered but the illustrations were reduced in size, and a few added from Petit''s unused woodcuts. In 1864-65 he travelled in the East and executed some striking drawings. He died in Lichfield on 2 Dec 1868, from a cold caught while sketching and was buried in St Micheal''s Churchyard. Petit was the founder of the British Archealogical Institute at Cambridge in 1844. He was also FSA, an honoury member of the Institute of British Architects, and a governor of Christ''s hospital.